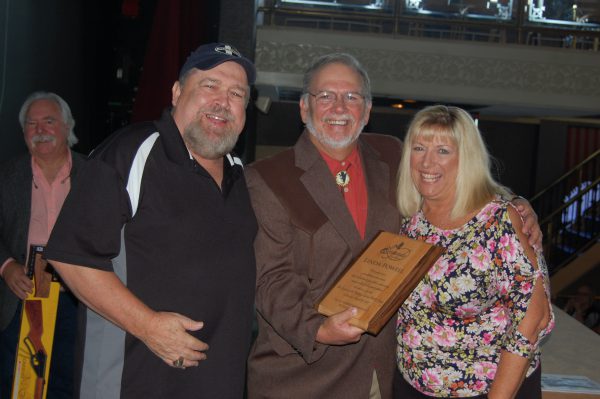 Honoring her Decades of Service to the Shooting Sports Industry

North Haven, CT – Garry Mason’s “Legends of the Outdoors” inducted Linda Powell, Director of Media Relations at O.F. Mossberg & Sons, Inc., into its Hall of Fame in recognition of her dedication to the outdoor industry, promotion of our hunting heritage and her efforts in furthering conservation. The event was held in Nashville, Tennessee, on Saturday, August 25, 2018.

Born and raised in North Carolina, Powell did not discover her passion for the outdoors until later in life. Hired by a firearms company in her thirties, having never shot a firearm, she went on her first hunt a year later and has never looked back. She has over 20 years’ experience in the firearms industry and currently serves as Director of Media Relations at O.F. Mossberg & Sons, Inc.  She is also passionate about mentoring new hunters to participate in the shooting sports.  Powell’s commitment goes beyond her day job; she is a Life Member of the Rocky Mountain Elk Foundation (RMEF) and former RMEF Board Member (2010 – 2016), Benefactor Member of the NRA, member of the Boone and Crockett Club and Safari Club International as well as other conservation groups.

“It’s a tremendous honor, and incredibly humbling, to be recognized by your peers,” commented Powell. “I have been very fortunate to work in the firearms industry over the past 20+ years and share my passion for the outdoors, hunting and the shooting sports. Powell continued, “In accepting this honor, I must acknowledge the many people who mentored and encouraged me throughout my journey.”

“A legend in her own right, Linda is one of the most well-respected people in the shooting sports industry and we are proud to have her as part of the Mossberg team,” said John MacLellan, Vice President of Sales and Marketing for Mossberg. “On behalf of all of us at Mossberg, we’d like to take this opportunity to offer Linda the most sincere congratulations on this major achievement.”

About O.F. Mossberg & Sons, Inc.
Founded in 1919, O.F. Mossberg & Sons, Inc. is the oldest family-owned firearms manufacturer in America and is the largest pump-action shotgun manufacturer in the world. Leading the way with over 100 design and utility patents to its credit, and standing as the first ISO 9001 Certified long-gun manufacturer, Mossberg is considered to be one of the most innovative firearms manufacturers in U.S. History. For more information on commercial, special purpose, law enforcement, military shotguns, rifles, and accessories, please visit their website at www.mossberg.com.

This entry was posted in Hunting, News and tagged Awards, Legends of the Outdoors, mossberg. Bookmark the permalink.