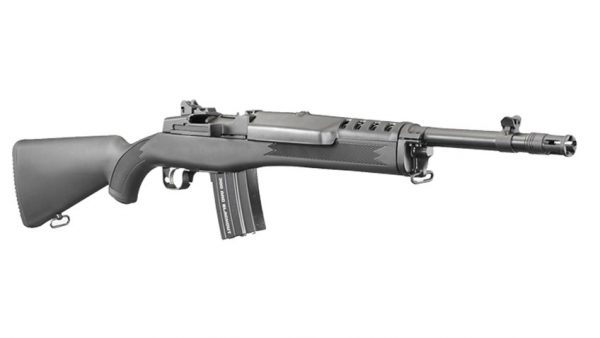 There is no question that your chances of surviving a violent criminal attack increase greatly when you can get your hands on a long gun. As I have previously addressed the defensive shotgun, let’s take a look at the handy defensive carbine.

A carbine not only extends a person’s practical range, but it also improves one’s ability to deliver accurate shots. The prompt appearance of a carbine may also resolve a problem before a shot is ever fired simply because a bad guy may very well perceive that he is out-gunned before an altercation ever starts. In short, the carbine can give the armed citizen both a practical and a psychological advantage in a conflict.

One of the most popular, if not the most popular, carbines manufactured today is the AR (it stands for Armalite Rifle). Built by numerous companies at a range of prices that will fit into most budgets, this platform has a lot going for it as a defensive tool. Its original caliber, .223/5.56 mm, works just fine for the armed citizen, but it is also available in a number of other useful calibers. Additionally, this semi-automatic carbine is offered in a variety of sizes, styles and barrel lengths, and has the ability for endless customization.

Also popular for defensive use are the various carbines of the Kalashnikov design, such as the AK-47. This gun is generally chambered for the 7.62×39 Soviet cartridge which has ballistics similar to the American .30/30 Win. cartridge. A number of different AKs are available on the U.S. market and prices are generally reasonable for this tough carbine.

While the AR and AK are good guns and good choices for the armed citizen, neither one has really suited me. Let me be clear, I’m not knocking the guns, I am just saying that they have never really appealed to me. Instead, I’ve always preferred the Ruger Mini-14, especially the newer tactical version.

The Ruger Mini has always reminded me of the fast-handling M1 Carbine, with the improved advantage of the .223 cartridge. Being left handed, I really like the M1 Garand-style safety located in the front of the trigger guard. Since the stock is shaped like the conventional bolt guns that I hunt with, I find that I can do some pretty accurate snap shooting with the Mini-14 when the need arises. Accuracy wise, down here along the Rio Grande we say that the Mini-14 might not be a minute-of-angle carbine but it is sure a “minute-of-cartel” carbine.

When the citizen starts thinking about carbines that will serve for personal defense, he or she realizes that there is virtually no end to the possibilities. M1 carbines are available, new and used, as are the various lever-action carbines. The Marlin and Winchester lever guns chambered for the .30/30 cartridge do great service for home and personal defense. And then there are the various lever guns chambered for pistol cartridges, like the .357 Mag. and .44 Mag.

When I was serving as county sheriff in southwest Texas, I found that Browning had just come out with a very nice copy of the Winchester Model 92 carbine. I latched onto one in .44 Mag. My gunsmith cut the barrel and magazine tube to 16 inches, mounted a gold-bead front sight, and put a Williams Foolproof receiver sight on the other end. Cut down in this manner, the Browning carbine still held 9 rounds of .44 Mag. ammo, which turned out to be all I ever needed. Nowadays, the Ruger Mini-14 is my car gun (that’s legal in my state) and the Browning 92 does house gun duties.

One might keep in mind that simply owning a carbine does not make one efficient with one. Like any other defensive tool, a person must practice with the carbine until proficient with it. Knowing how to get one into action quickly and accurately is important. It is also critical to be able to reload as well as clear any malfunctions common to one’s preferred carbine.

It is also a good idea to keep in mind that possessing a defensive carbine does not mean that fighting pitched battles is a good idea for the armed citizen. The defense gun, whatever that happens to be, should be an Exit Ticket for the citizen. At the earliest possible opportunity, we are well advised to get away from the threat, and the defense gun is used for those who would block our exit in a deadly manner.

You Might Be Playing at Personal Defense If...
It's a Border Thing
Fall 2010 News Update

3 Responses to The Handy Carbine