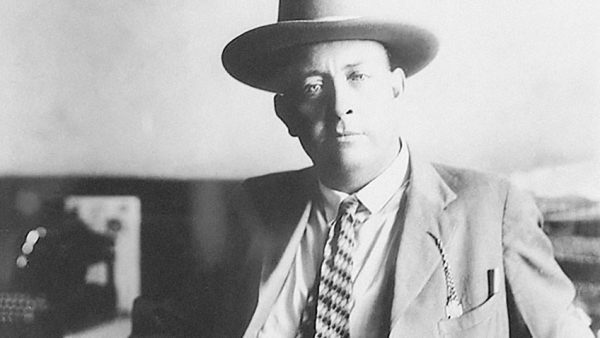 Frank Hamer was not afraid to wade into trouble, but occasionally learned a hard lesson doing so. Such was the case at Sweetwater, TX.

Texas Ranger Frank Hamer is best known for helping to end the careers of Clyde Barrow and Bonnie Parker. However, he was a lawman of one kind or another for many years and engaged in many shootings. His knowledge of personal defense was not academic, nor were all of his fights in the line of duty. We might look at just one of his many encounters and see what we can learn from it that will be beneficial to us in our own personal defense.

In 1917, romance threw Frank Hamer into a first-class Texas feud. Hamer married Gladys Johnson while she and her brother, Emmett, were under indictment for killing Gladys’ ex-husband, Ed Sims. The Johnson and Sims families were prominent ranch families in West Texas and both were used to having their own way about things. The Johnson family had the support of the Hamer brothers, Frank and Harrison, while the Sims family relied on ex-sheriff and ex-Texas Ranger Gee McMeans. With this many gun toters, the stage was set for trouble.

On Oct. 1, 1917, Frank, Harrison, Gladys and Emmett were driving back from a court hearing in Baird, TX. The route to their home in Snyder took them through Sweetwater. Frank had been warned that Gee McMeans would be waiting for them in Sweetwater. Frank chose to ignore the warning but he did strap on a second gun, his Smith & Wesson .44 Spl.

Stopping at a gas station in Sweetwater, Frank went in to get a tire fixed while Harrison and Emmett hunted for a restroom. Gladys stayed in the car.

As Frank Hamer walked back out of the station, he came face to face with Gee McMeans, who had a .45 ACP pistol in his hand and quickly shot Hamer in the shoulder. Hamer slapped the gun down and it went off a second time, hitting him in the thigh. His blow to the 1911 caused it to malfunction, probably causing a failure to feed. With one hand holding the .45, Hamer used his other hand to beat McMeans about the face.

As this was going on, McMeans’ henchman, H.E. Phillips, ran up to the struggling pair with his shotgun. He fired at Hamer’s head from close range and missed his whole head, but shredded Frank’s Stetson. As Hamer dropped to the ground, stunned, both of his attackers ran to their nearby car.

Recovering somewhat, Hamer drew his .44 Spl. and turned to see McMeans pulling a shotgun from the car. Hamer fired one shot from fairly close range and hit McMeans in the heart, dropping him instantly. Phillips ran for it.

Harrison Hamer, who had just arrived back on the scene, started to shoot the fleeing Phillips. But Frank pushed Harrison’s rifle barrel up and told him not to shoot a man in the back. Phillips was later arrested, as was the entire Hamer party. Five days later, the grand jury refused to indict Frank Hamer for the killing of Gee McMeans.

For some reason, possibly his pride, Hamer had chosen to ignore the warning about a potential ambush in Sweetwater. Pride can get a person in a lot of trouble, hurt or worse. The smart move would have been to avoid going through the town at all. Today, a jury might get the impression that a person was welcoming the opportunity to engage his enemies. Not to mention, tactically, it is just not a good idea to walk into a trap when you suspect that it is there waiting for you.

Additionally, we see the effects of tunnel vision on our awareness in a chaotic situation. Phillips was able to approach very close to Hamer with a shotgun. Now, admittedly, Hamer had his hands full, but it appears that he was not aware of the additional threat until the shotgun was fired.

A couple of other points can be gleaned from Frank Hamer’s fight. One is that, just because you have been shot, it doesn’t mean that you have lost the fight—when the threat continues, a smart man keeps fighting. And, second, you can miss with a shotgun—they do have to be aimed if one is expecting to get hits.

Additionally, it is also never a good idea to split your forces when you know a fight might be about to occur. Had Frank and Harrison Hamer stayed together, Frank might not have been shot at all. In fact, the whole fight might never have happened. Crooks don’t like even odds.

Finally, throughout the whole encounter, Gladys was leaning out of the car window, shooting at McMeans and Phillips with her Colt Pocket Auto until it was empty. She didn’t hit anyone and didn’t affect the outcome of the fight one single bit. Simply having a gun doesn’t get the job done, nor is employing it quickly—you have to be able to shoot it accurately as well as rapidly.

When we talk about personal defense, we may spend too much time talking about attacks from criminals who are not known to us. It is also a good idea to realize that dangerous encounters can occur with people who are known to us. This reality should also be considered when we are formulating our own personal defense plans. That said, the overpowering urge should always be to find a way to avoid trouble whenever it is the least bit possible.

Frank Hamer and Gladys stayed together for the rest of Frank’s life. They raised her two girls and two boys of their own, one of whom, Frank Jr., was a friend of mine. But, you can rest assured that their lives were never the same after that bloody day in Sweetwater.