A Review of Jim Wilson’s “White Rose” by Nancy Eliott 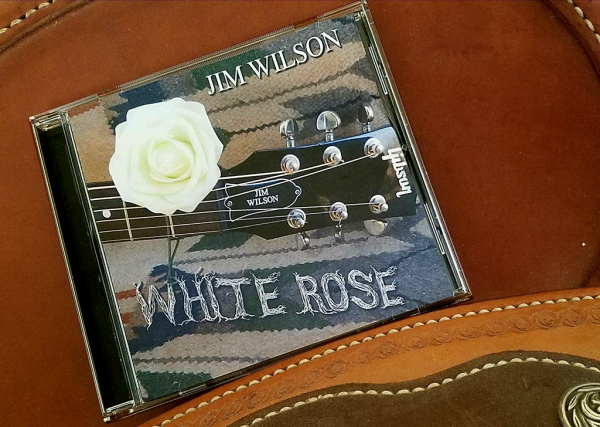 It has been five or six years since Jim Wilson gave us a new album. The anticipation created by such a wait has been well met by the arrival of “White Rose.”

When Jim first spoke to me in the fall of 2015 about his new project he was collecting songs and three of the powerful songwriters he borrowed from; Chuck Pyle, Merle Haggard and Guy Clark, were still influencing the music world from this side of the veil. Ian Tyson, Juliet Gobert and Hayes Carll are, thankfully, with us still and their impact on “White Rose” serves to describe not only Jim’s wise choice of songs for his Lost Love theme on this album, but also his depth of heart and sense of humor.

And, two years in the making is not an overly long time even in our high tech digital world. Two years means great care has been taken through out the process and it shows. Rather, it plays.

My personal favorites on “White Rose” are; Baton Rouge ( Guy Clark & J.C. Crowley ), Over You Now ( Juliet Gobert ), Someday When Things Are Good ( Merle Haggard & Leona Williams ), and of course, the two songs I was thrilled to sing on with Jim, She Ain’t Going Nowhere ( Guy Clark ) and our duet, I Don’t Love You Much, Do I? ( Guy Clark & Richard Leigh ).

White Rose is a simply done album with each song presented as an individual work. Jim’s only directives to the musicians and vocalists was to play and sing what they felt and heard in each song. That creative freedom transforms into a new freedom for the ear of the listener. Freedom from over produced sameness from song to song. Freedom of new expectation and surprise. It is all balanced perfectly on Jim’s no affectation vocal delivery which I can only describe as a favorite blanket; the colors and textures of his beloved Big Bend country the weft woven through the warp of life experience.

White Rose is an album to get and to give. An album to stand the test of time. But, maybe it won’t be so long until Jim makes a new record for us.

Orders and booking through Jim Wilson