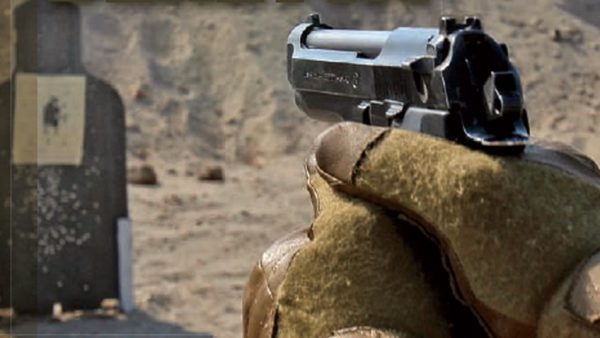 The flash sight picture is a defensive shooting technique that was developed by Col. Jeff Cooper as a part of the Modern Technique of the Pistol. It is a method that allows the defensive shooter to get quick hits on a threat using the level of accuracy that is needed in close-range gunfighting.

In target shooting and other handgun endeavors, the shooter has to align the rear sight with the front sight while centering the target. When done correctly, it allows for some very precise target placement. Even with practice, however, this method takes too long for it to be effective in dealing with violent criminal attacks which usually occur within 10 yards or less.

The shooter must realize that we cannot clearly focus on the rear sight, the front sight, and the target, all at the same time. And, in close-range defensive shooting, the careful alignment of the rear and front sight is simply not necessary. The inexperienced shooter will tend to focus on the threat and not even look at his pistol sights. Unfortunately, this can cause some spectacular misses, even at very close range. In close-range gunfighting, the key is to focus on the front sight only and this is what we call the “flash sight picture.”

Obviously, when confronted with a threat, a person will tend to focus his attention on that threat. This is as it should be because we want to see that the attacker actually has a deadly weapon in his hands. We also will likely be giving verbal commands to the person, ordering him to drop his weapon, or to leave, or to simply stop. We need to be able to see if that person is complying with our commands so that we avoid shooting someone who has dropped his weapon and is no longer a threat to us.

However, when we realize that the person is still an immediate threat, we may need to shoot him. As a person is drawing his handgun, bringing to bear on the threat, and issuing verbal commands, he should be looking at the place, the vital zone, on his attacker that he intends to deliver his bullet(s), should that be necessary. As the decision is made to fire, the pistol should already be in the line of sight. The visual focus switches from the threat to the front sight, so that the front sight is seen clearly, as the trigger is pressed and the shot, or shots, are delivered.

The flash sight picture does not lend itself to the tiny groups that are seen in bullseye shooting, nor is that necessary. With practice, the flash sight picture is good enough to deliver hit inside of an eight-inch circle, and that is actually to be preferred. The spread of bullet hits, inside the vital zone, causes increased chances of serious tissue damage that will quickly incapacitate the attacker. In a gunfight we don’t need tiny groups nearly as much as we need the bad guy to immediately quit his attack.

To be effective, the flash sight picture must be practiced both in dry practice and in live fire. The key is to see the front sight clearly and quickly just as we break the shot. It is also necessary to practice this technique to determine the ranges that it will be effective for the individual person. Somewhere around 10 yards, more or less, it will be necessary to resort to the conventional sight picture in order to make effective hits.

By using our front sight, and the flash sight picture, we avoid wasting the time it takes to obtain a conventional sight picture. But we also avoid the mistake of just sticking the gun out there and blazing away. It is always important to remember that the defensive shooter “owns” every shot that he fires. None of us want to impact people or property that do not need to be shot.

The most deadly criminal attacks are those that come at close range. Using the flash sight picture allows us to deliver relatively precise bullet placement that will stop just such an attack.

Those Handy Carbines
Back to the Basics
You Might Be Playing at Personal Defense If...