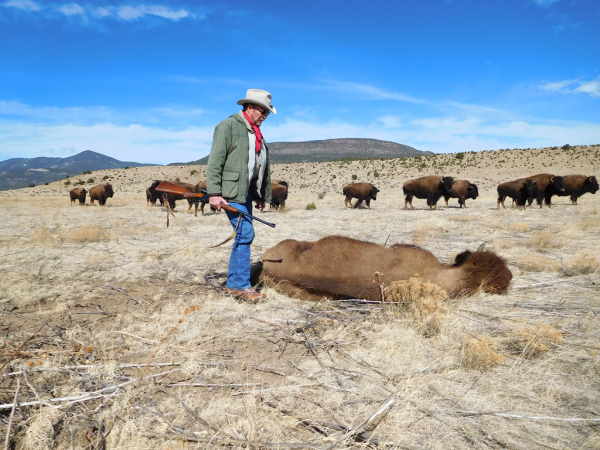 A lot of folks don’t really understand the difference in a management hunt and a cull hunt. In fact, they often use the terms interchangeably. In a cull hunt, when you need to take 10 animals out of the herd, you shoot the first 10 critters that you find. In a management hunt, the animals are carefully selected in order to take old critters that might not make it through the next winter and those that just don’t measure up as representative of the species. Obviously, the management-hunt approach is far more effective in maintaining a trophy herd of animals.

Recently, my friend Dale Burson—from up in the Texas Panhandle—put together a bison management hunt on a private ranch in northern New Mexico. I was fortunate to be one of six hunters invited to carefully trim the herd of old timers and young misfits.

When I got the invitation, I knew immediately just which rifle I would use for this hunt. My Ruger #1, in .375 H&H, has collected Asian buffalo, Australian Wild Ox, and African cape buffalo. It just seemed natural that we would round things out by collecting an American bison. My load of choice for buffalo & bison is topped off with the Barnes TSX 350 gr. bullet running just over 2400fps.

Working with the ranch manager, we selected an old bison cow. Moving in to about 25 yards, I was able to put the 350 gr Barnes into the bison’s heart as she took a step. The animal took just a few steps and then was down and out. The bullet had blown up the heart and exited out the other side.

By far, the most impressive shot was made by a friend from Amarillo who elected to use his re-curve bow and a razor sharp broadhead. We weren’t really sure that a bison would be immediately impressed with a bow & arrow, but this guy had already taken an Alaskan grizzly with the same rig. From about 35 yards, he laced his arrow into the vital zone and virtually dropped the bison on the spot. Frankly, if I had to feed myself with string & stick I would have died of starvation long ago; needless to say, I was impressed.

Others in our group used stuff like a ’95 Winchester in .405, a .416 Rigby, and a Remington Rolling Block in .50-something-or-another. It was definitely an eclectic group.

This was certainly not difficult work, but it was important work. All of the meat went to a packer. The hides and heads were saved as nice trophies. And this bison herd is healthier for the work that was done. Besides which, we all got to spend time in a very beautiful part of New Mexico. In fact, the bison scenes in Lonesome Dove had been filmed in that immediate area.

Anti-hunters probably won’t ever understand the need for a management hunt on wild animals. But, frankly, I could care less. It was a weekend spent with good guns, good friends, and good hunting.