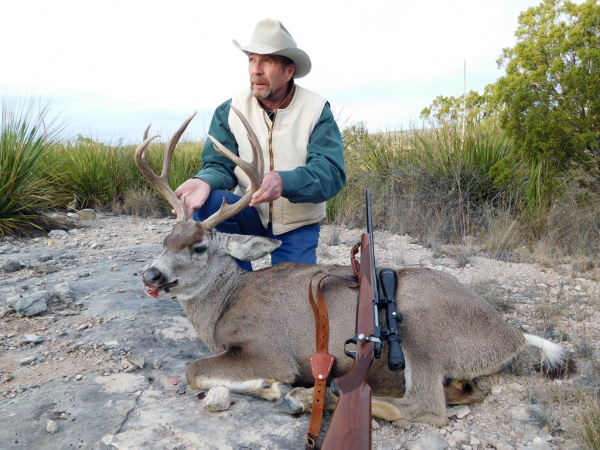 It has been an interesting deer season, to say the least, here in the Transpecos region of West Texas. To begin with, we have had a lot of rain this past year, all over the area. So there is still a lot of cover and the deer simply have not had to go far to get a full belly. In addition, the weather has yet to cooperate, with only a few days below freezing. What I’m saying that you just don’t see a lot of deer out and about, looking for their next meal.

Recently, Shane Jahn and I roamed our deer lease near where the Pecos River runs into the Rio Grande. We were looking for management bucks to take out of the gene pool and to check the condition and number of potential trophy bucks that would be coming along. The last morning of this particular hunt, we came across this old gentleman and I decided to collect him.

While this buck does not have as good a spread as one might like, he does have some good mass to his antlers, with the mass running right out to the antler tips. His teeth showed him to be about 7 years old and his general condition indicated that this was probably his last good year. His general condition and the condition of his hocks indicated that he’d been breeding his share of does. I guess you could say that the old gentleman went out while at the top of his game.

I was shooting my left-handed, Ruger Hawkeye, in .30/06, with a Leupold 3×9 scope, and a Barranti Peabody sling. Ammunition was the Federal 165 grain Trophy Bonded Tip cartridge. I have been extremely pleased with the accuracy of this load and the performance of these bullets on game. To date, I’ve now collected two aoudad and this mulie buck with the cartridge and can’t fault performance in any way. This mulie buck went only a short distance….and that was straight down. The shot, by the way was a close one, about 45-50 yards.

My son and I, and possibly Shane Jahn, will probably be out among them again next week. We’ll be looking to take several management bucks out of the general deer herd. We’ll be doing more looking than we will shooting…and just generally enjoying being out-of-doors with good friends and wild game. That’s what true hunting is all about, isn’t it?

This entry was posted in Hunting and tagged Shane Jahn, texas. Bookmark the permalink.