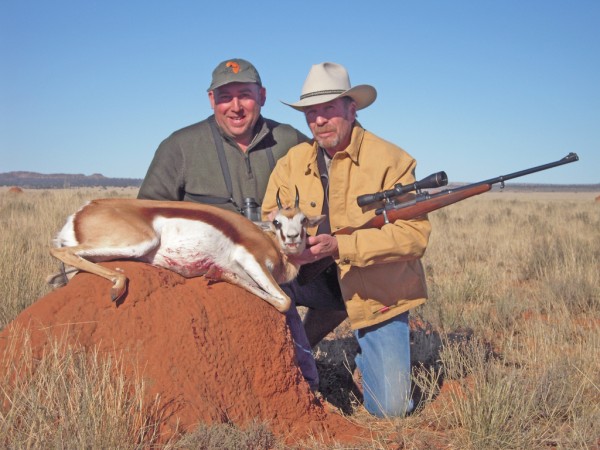 Somewhere south of Kimberley, South Africa… On my recent African hunt I was all set to hunt with the Mossberg Patriot rifle, in .308, and topped off with a really nice 3×9 scope. Trouble was… my scope cratered on me. Now I am not going to name the scope because stuff like that just happens and the scope company is going out of their way to make everything right. If you want to attach blame, you can attach it to me for not taking along an extra scope.

My first thought was to borrow Richard Mann’s extra scope and stick it on the Mossberg. I had been shooting the Mossberg for several months and really liked it… nice rifle… accurate… good price point. It was right about then that some Afrikaner Luck raised its head and that changed the whole program.

My PH was a jolly Afrikaner by the name of Leon DuPlessis. Seeing my scope issues, he quietly asked if I would be willing to hunt with a 7×57. Are you kidding? That is one of my favorite rifle calibers! He then proceeded to uncase an old Mauser-action, Czech-made BRNO rifle. As he handed it to me, he told me that it had been his grandpa’s rifle.

This BRNO 7×57 had a worn blue finish and the European-style oil-finished stock. I would, however, point out that there was no rust or pit marks anywhere on the rifle. It was a man’s tool that had obviously been respected, used, and properly cared for. Had my eyes been 20-plus years younger, I would have loved to have hunted with it using the factory iron sights. Thankfully, Leon had a very nice Leupold 3×9 scope already installed on this old warrior… a fact that I much appreciated.

Now, Imagine if you will, here I am hunting in South Africa, the home of the Afrikaner people, a people whose history and personalities I have admired for years. My PH is a proud Afrikaner. My rifle had belonged to his Afrikaner grandpa. I was quite tempted to take a shot at a bloody Englishman,what?

Linda Powell pointed out to me that this probably would not be appreciated in the same vein as I might have intended it to be. So, relying on her better judgment in this matter, I set out to accomplish the next best thing. The next best thing being the national animal of South Africa, the springbok.

The springbok is a graceful little antelope that can run slightly faster than greased lightning and is quite tasty. I managed to make a neck shot on one at about 100 yards. What is amazing is that this occurred while I was actually aiming at the neck.

Without taking one bit of respect from the fine Mossberg Patriot rifle, I finished my South Africa hunt using Leon’s (and his grandpa’s) rifle .In this amazing age of internet service, Leon and the whole crew at Fort Richmond Safaris are now all Facebook friends of mine .I hope that, when he sees this little write up, he will send me along some more of the history of grandpa’s BRNO and I promise to share it with you when he does.

I have been blessed to be able to hunt in many different places, with many fine people. High on this list are the fine folks in South Africa. Read up on their history, if you haven’t already. The Afrikaner: A Man and his Mauser… you’ve just got to admire folks like that.

Old Lucky
A Preview of Things to Come
Who Killed Joe Sitter?