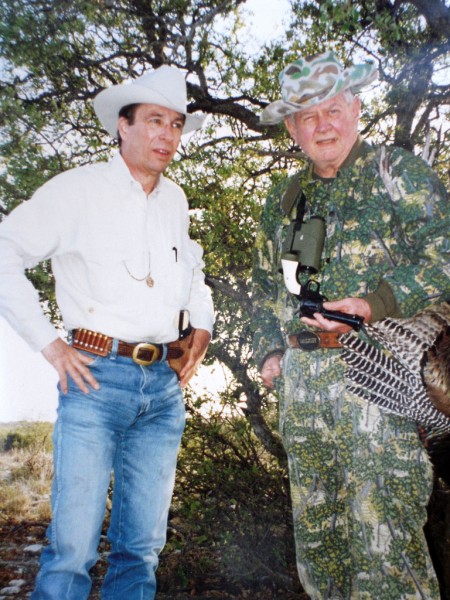 Besides being one of the greatest outdoor writers of our time, John Wootters was also one of the best joke and storytellers. We all loved going on the gunwriter hunts when we knew that John would be there. It was a solid guarantee of some good tales and a lot of laughing. Here are a couple of stories that John told me…

Quite a few years ago, a group was gotten together to go around the country and put on deer-hunting seminars. I think the NRA might have been the sponsor and I also believe that Larry Weishuhn was another one of the presenters. At any rate, the group wound its way back east, one of the northeastern states, to be exact, and was ready to put on quite an evening for the local hunters.

Wootters said the place was packed and everyone was really enjoying this evening of sharing hunting lore and skills. When it came John’s turn, he waxed eloquently about every rifle, cartridge, and bullet, that was suitable for deer hunting. I mean, he hit ’em all! The .25 Remington, .351 Winchester, .32 Winchester Special…. old or new, it didn’t matter, nothing was left out when it came to deer rifles and ammo.

When he was done, and the applause had died away, Wootters asked for questions from the audience. One old fellow got up and said, “Uh, Mr. Wootters, that was very informative… but they only let us hunt with shotguns in this state…”

Another time, John Wootters was invited to speak at a safari banquet in England. I think it might have been the London Safari Club. Regardless, it was a Big Dog deal in every way. We’re talking black tie, cloth napkins, and real silver silverware. Only the Big Boys At The Bicycle Rack were invited. So they picked John up at the airport and were driving him to his hotel. John asked his new friends,

“Bull corn!” says Wootters. “Everyone makes fun of somebody.”

“Well, sir, as a matter of fact, we do enjoy a good Irish joke now and then.”

That evening, in his hotel room, Wootters sat down and converted his favorite Texas Aggie jokes into Irish jokes. Wasn’t too hard… Billy Bob and Bubba just became Paddy and O’Reilly. Later that evening, John Wootters just killed them with his speech. Those Englishmen were down on the floor, whipping themselves, they were laughing so hard. How in the hell could a Texan (of all people!!!) know so many good Irish jokes?

John Wootters was a good ‘un! I miss him.