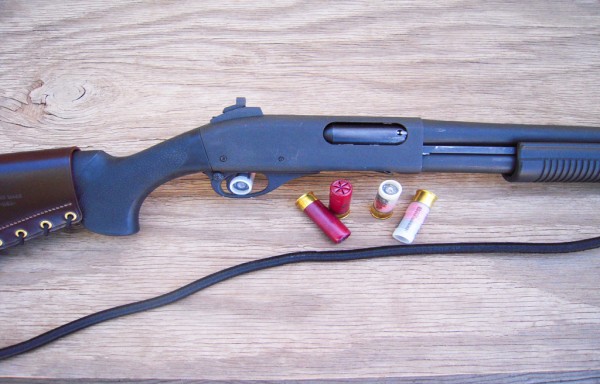 Richard Mann and I have this little running feud going. You see, he can’t stand shotguns and I wouldn’t keep house without one. Of course, I’m talking about fighting shotguns. Both of us are ex-lawmen and I guess we’ve just had different experiences. Or, it could just be that Richard has just imbibed too much of that corn recipe that West Virginia is famous for. He may not know that there is a difference between Jake and Shine, or found out too late.

In this day souped-up semi-auto rifles, the shotgun is often overlooked as a defensive tool. And that is a real mistake because it is an excellent defensive tool. One can stoke it with low-base birdshot loads for fighting inside the house, buckshot for out-of-doors, and slugs for when the ranges get a bit longer. And many of us can testify that it will hammer a bad guy the way no defensive handgun ever will.

Now, I absolutely don’t buy into the crap about the bad guys hearing you rack the slide on your pump 12 gauge and messing their pants. There are a whole lot of things wrong with that picture. But I will tell you that when a bad guy gets a close look at the business end of a sawed-off 12 gauge, he will often begin to consider Christian virtues and peaceful attitudes. And, if he doesn’t, you are holding the means to plead his case to a Higher Court.

The gun pictured here started life as a Remington 870 police model with ghost-ring sights. Since then, it’s had a shorter buttstock installed courtesy of Hogue Grips. It has also been to the Vang Comp Shotgun Clinic in Chino Valley, Arizona, for a little TLC. Hans Vang lengthened the forcing cone and back-bored the barrel to extend the range of my buckshot load to about 30 yards. Beyond that, I rely on the slug loads that are carried in the Galco cartridge boot.

A while back Bryce Towsley and I were pleased to do a little pro/con article stacking the pump shotgun against the autoloader. Well, I’ll let you in on a little secret: I don’t think there is really much difference at all. Take either one that suits you (Heck, get a good double barrel if you want to). A good shotgun is a mighty handy thing to have in a gunfight. In between shootouts, it will also take good care of the rattlesnakes and other critters that don’t belong in your yard and it can do a pretty darned good job of putting meat on your table.

The defensive shotgun is versatile, it’s handy, and crooks don’t like them at all…. especially when one is screwed on the end of their nose. That’s why I like shotguns.

A Preview of Things to Come
Colt Single Action Resource Book
Get a Handle on Your Carry Gun: Building Confidence in Your CCW Pistol