Thank God I Had A Gun

Let’s be perfectly frank, our government and the mainstream media (or is that the “lamestream media”?) don’t want you to know how many Americans use a firearm every year to protect themselves and their family. Some authorities suggest that about 2.5 million Americans use a gun every year to do just that. However, thanks to the NRA’s Armed Citizen column and folks like Chris Bird the word is getting out anyway.

Last weekend, at the Texas Concealed Handgun annual meeting, I had a chance to renew my friendship with 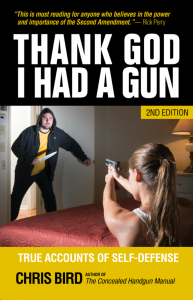 Chris Bird and get the updated copy of his book, “Thank God I Had A Gun: 2nd Edition.” Once I started reading it, I simply couldn’t put it down. Chris tells the stories of 17 gunfight survivors from all across the country who used armed resistance to defeat criminals. I give Chris an A+ as an interesting storyteller and an accomplished investigative reporter.

In “Thank God I Had A Gun: 2nd Edition” you read the story of Vic Stacy who shot it out with a criminal in Brownwood, Texas, and probably saved a peace officer’s life. Melinda Herman, from Georgia, used her .38 revolver to protect her children when a burglar invaded their home. Vinne Pervel, caught in the midst of Katrina, turned from a gun-control supporter to a gun rights advocate who used guns to defend his New Orleans home. And Rory Vertigan used his gun to shoot a Phoenix drug trafficker who had just killed a policeman.

These tales and many more are found in “Thank God I Had A Gun: 2nd Edition.” In addition, wherever he can, Chris tells us what kind of guns, ammo, and holsters, the citizens used during their encounters.

Chris Bird, by the way, is an Englishman who served in the Royal Military Police, was a Canadian cowboy, and has been a police reporter for newspapers in Canada and Texas. He is a firearms instructor and has written several other books on personal defense. Besides all that, Chris is just a nice guy and a joy to visit with.

You can order “Thank God I Had A Gun: 2nd Edition” from Privateer Publications or through Amazon. Retail on the trade paper edition is $19.95. Get a copy…. you won’t regret it!

Real-World Defensive Shooting Stances
The Sheriff WAS Amused!
The First Rule of Gunfighting: Get Training

96 Responses to Thank God I Had A Gun