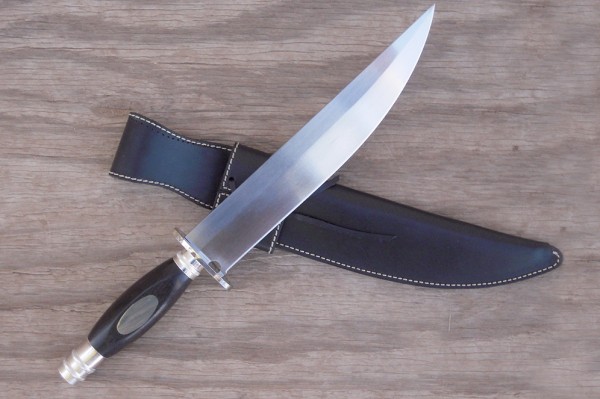 Bowie became connected, in legend, with the Bowie Knife in the 1820’s, when he fought in the famous Sandbar Fight in Louisiana. Wounded and down on his back, Bowie took a thrust from an enemy’s sword cane and then disemboweled the rascal with a knife. One of the legends surrounding Bowie is that the knife he used that day was borrowed from his brother Rezin. Further, some time after the fight, he returned the knife to Rezin and it was later lost by a family member.

In fact, there is good reason to believe that Rezin Bowie was more of a knife enthusiast than Jim was. Throughout his life, Rezin had various cutlers build knives for him. He even gave them away as gifts to special friends. My guess, and it is only a guess, is that the design of the knife was improved, or modified, as Rezin had different ones built.

The knife shown is called the Searles Bowie and is a quality reproduction available from Uberti USA. Daniel Searles was a well-known cutler from Baton Rouge, Louisiana, and he designed this knife at the request of Rezin Bowie. The best known actual Searles bowie is the one on display at the Alamo. It was a gift from Rezin to a friend.

The most popular version of the Bowie knife are the clip-pointed models that were first marketed by Sheffield of England following Jim Bowie’s death. While these are excellent knives, they are probably not what Jim Bowie used, but a later design. Some folks who saw Jim Bowie’s actual knife, or knives (there could have been several of them), say it looked like a bit like a butcher knife.

We’ll probably never know what the original bowie looked like. Nor will we likely ever know what happened to the knife that Bowie used at the Alamo. However, for my money, I will always think that the Searles Bowie was it. As usual, when we study history, more questions than facts arise.

The Winchester Model 1894: A Classic American Rifle
Mossman Sesquicentennial Guitar
Open Letter to the Board of Directors at Colt Firearms