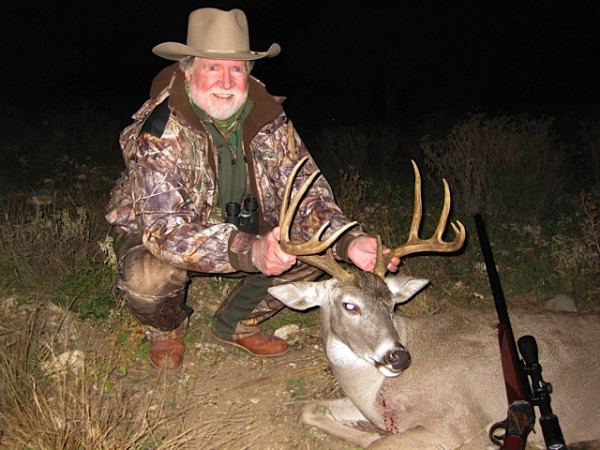 So here we are, sitting in a blind on the Jack Baggett Ranch, south of Ozona. There’s me, Joe Coogan, and Tony The Guide. The blind is a nice one, but it’s built for two hunters. It was a little crowded. Coogan and I don’t care for hunting from a blind, but an icy rain was falling and it was colder than hell! A relatively warm and very dry deer blind did not seem nearly so bad.

It was late in the evening, starting to get dark and colder, so Tony The Guide suggested that he go get the truck and we repair to the lodge to check out the hot coffee situation. Naturally, about the time Tony The Guide started back with the truck, here came a really nice whitetail buck. Since mine was already hanging, this was Coogan’s turn to put some venison on the ground.

Naturally, just about the time Coogan was ready to make his shot, the buck saw the truck and ran to a nearby rocky draw. With just his head and neck showing above the edge of the draw, Joe no longer had a shot and the deer was too far to the right for Joe to get his sights on him.

Seeing our situation, Tony The Guide just drove on around and went back the way he had come. And, wouldn’t you know it, that sucked this big buck right up out of the draw. Now, all Coogan had to do was move to his left and try to bring his rifle to bear.

Finally, Coogan was contorted like a yoga advocate on rock cocaine and damned near in my lap. As you might have guessed, since this is not Joe Coogan’s first rodeo, he made a perfect shoulder shot at about 80 yards. The buck went about four feet… straight down.

In retrospect, I am glad that Joe never quite made it into my lap. I’m glad that we had both bathed recently. And I am forever grateful that we didn’t have a camera crew present!

A Jeep Gun
The Stuff That Goes With It
Late Breaking Jim Wilson Appearance News!