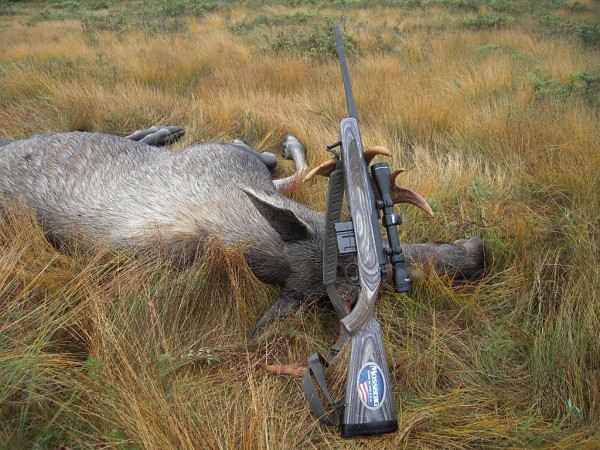 On our recent moose hunt, I flew to Philadelphia and then on to Halifax, Nova Scotia. The next day, we flew on into Newfoundland and landed at Gander. As often happens on an out-of-country hunting trip, my bags stayed in Philadelphia and I arrived in hunting camp without any of my gear. Linda Powell had brought the rifle, but I had no ammo and no hunting clothes.

Tony Stone outfitted me with hunting clothes and some 150gr. Winchester E-Tip .308 ammunition. So, naturally, I did what you folks would do…I went hunting. My bag arrived two days later, without the ammo (it was seized by Canadian Customs since I wasn’t there to declare it). The world is ever so much safer because my three boxes of Barnes .308 cartridges are out of circulation!

At any rate, the Winchester E-Tip ammo (their monolithic solid with a polymer tip) performed quite well on my moose. The bullet expanded perfectly and I really didn’t need the second shot. Of course, I’m not apologizing because the moose was still on his feet (though a bit shaky) and I ran the bolt out of habit and gave him that second shot.

Some may wonder about the .308 as a moose cartridge, but I’ve got to tell you that it performed quite well on my moose and David Draper‘s as well. More importantly, the cartridge is quite popular among Canadian hunters. Just about all of our guides told me that this was the cartridge that they used for moose hunting. The day of the .303 British in Canada is slowly giving way to the .308.

The point is that you really don’t need one of those hard-kicking magnums to collect your annual moose meat. Standard rifle cartridges will do the job quite nicely when you bother to put the bullet where it needs to go. The Mossberg MVP series of rifles? Those are moderately-priced rifles that are tough enough for the northern hunt and fully capable of getting the job done.

The Greatest Game Animal of Them All
Nailing Size and Fit for your Personal Defense Handgun
Federal Trophy Bonded Tip: Great Hunting Ammo