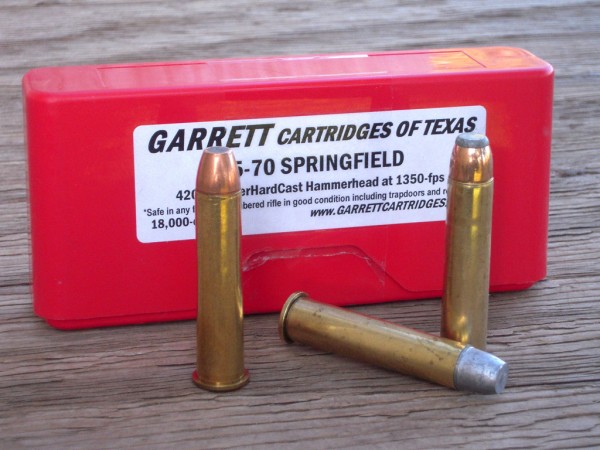 The .45/70 Springfield (also called .45/70 Government) was designed in 1873 by the Springfield Armory for use in the U.S. Military’s Springfield Model 1873 rifle and carbine. That’s the gun we call the Trapdoor Springfield. The original army load consisted of a 405 gr lead bullet over 70 grains of black powder, for about 1600fps. It’s what we fought the Indian Wars with and everything else until almost 1900 when the .30/40 Krag was adopted. Neat old guns and neat old history.

The amazing thing is that the .45/70 cartridge caught on and has maintained an impressive popularity as a sporting round. You still see guns chambered for the cartridge in the hunting fields from Texas to Alaska. In fact, just last summer, I watched my friend and colleague Richard Mann dispatch a pretty darned big African cape buffalo with a Marlin levergun that was so chambered.

Nowadays, you can get good, stout rifles chambered in .45/70, like the Marlin Guide Gun and the Ruger #1. You can also get factory-equivalent ammo that will do well for deer hunting, or you get some scalding-hot stuff the likes of which Richard Mann delivered to his cape buffalo. Most ammunition companies offer several loadings for the .45/70 cartridge.

As a friend of mine likes to say, age is only a number. Forget that the .45/70 was developed in 1873. Forget that it has a large-capacity case because it was designed for black powder. Forget that there are a number of modern cartridges that will outshoot it. The .45/70 is still around because it works, it’s powerful, it’s accurate, and folks have learned that they can depend in its performance.