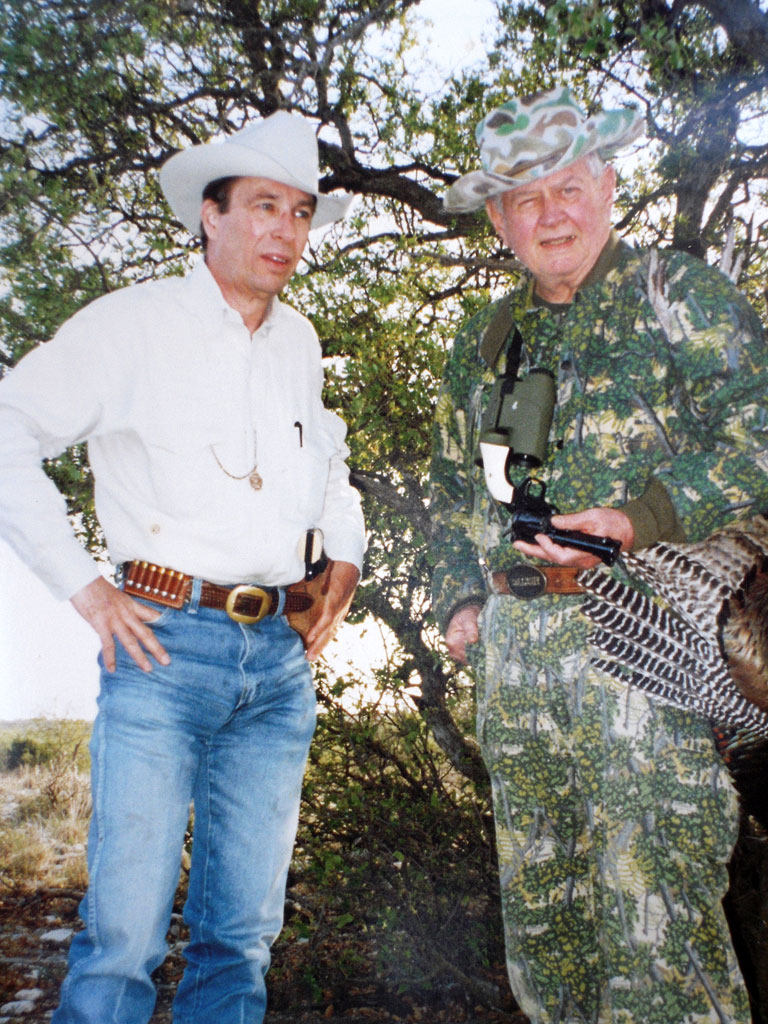 This past weekend I was down at Ingram, Texas, at the home of John & Jeanie Wootters to participate in a memorial service and celebration of the life of John Wootters. John started writing gun & hunting articles shortly after he came home from the Korean Conflict. In a very short time he became one of the finest writers that we have ever had in the gun writing industry. He could write technical articles, he could write humor, and he could write adventure. Through his stories, John had the ability to make the rest of us smell the woodsmoke of his campfire.

The sixgun that John is holding in this photo is what brought us together as writers and, ultimately, as friends. It is a 3-screw Ruger Blackhawk .357 Magnum that had been converted to .44 Special. John had the work done so that he could present the gun to his ailing friend Skeeter Skelton. When Skeeter passed on before the work could be finished, John had it completed and carried it as his personal single action and a constant reminder of his friendship with Skeeter.

A friend of John’s showed me the .44 and I sent word to John, whom I had not met, that he ought to write that story up. In a short while, word came from Wootters inviting me to write that story. I spent a delightful couple of days on the Wootters’ deer lease with John and Jeanie, shooting the gun, shooting photos, and just visiting.

I sent the completed article to Guns & Ammo. In short order I got a call from Todd Smith with word that the article would appear in the Guns & Ammo Annual, a prestigious posting. But Todd had a couple of issues that he said we needed to discuss. He had shown the article to Wootters and John wanted some changes made.

First, John wanted the name and location of his hunting ranch removed from the article. Secondly, it was his understanding that the article would be about Skeeter Skelton and Wootters was surprised that I had written quite a bit about John, too (all of which was very complimentary).

So, regarding the first concern, I told Todd to take out any reference to their hunting ranch to protect Wooters’ privacy. However, regarding my complimentary remarks about Wooters, I told Todd to tell Wootters to go to hell. Those remarks were sincere and I insisted that they stay in the piece. Surprisingly, immediately after that, doors started opening for me at Guns & Ammo and Petersen’s Publications. I’ll always believe that was the doing of John Wootters.

There is absolutely no telling how many of us writers were mentored by John Wootters. He never spoke about it. But, in the years to come, we hunted together, hung out together, and always enjoyed our visits. He taught me most of what I know about writing.

And so, this past weekend, we celebrated his life and felt sorry for ourselves and the giant hole that his passing left for all of us. He was a giant in our business.

Nailing Size and Fit for your Personal Defense Handgun
Transpecos Mule Deer
Colt: An Icon in the Firearms Industry

This entry was posted in Men At Arms, Revolvers and tagged .44 special, guns & ammo, ruger, texas. Bookmark the permalink.