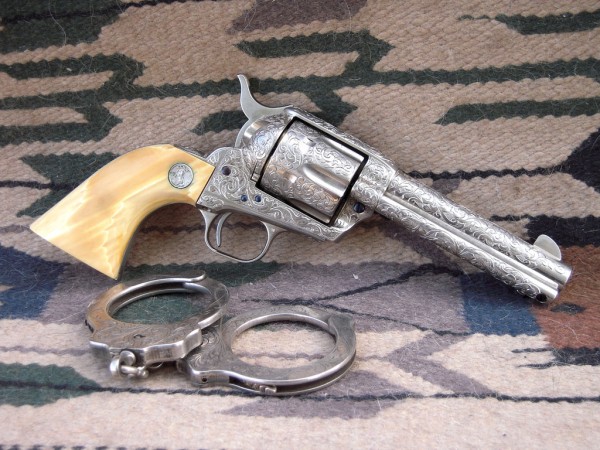 Not only was Frank Hamer an interesting character, but he also set the mold for the Texas Rangers who came after him. Throughout his long career, Hamer always relied on his engraved Colt .45 single action. However, after his horseback days were behind him, Hamer rarely wore a cartridge belt. Instead, he generally carried his sixgun in his waistband and a reload of cartridges in a coat pocket.

Hamer was also an advocate of being able to shoot a handgun at longer distances because, he explained, one might not have his rifle handy when a fight started. He also told his biographer, Dr. Walter Prescott Webb, that he only shot from the hip when his attacker was so close that he could not raise the gun to eye level and use the sights.

However, my favorite Hamer story has to do with the second clean-up of Borger, Texas. The governor had declared martial law and sent Capt. Hamer in with a bunch of his Rangers to clean things up once and for all. One of the reasons that martial law had been declared was because the police chief , sheriff, and most of their men, were all crooked. Not only were they removed from office, but warrants were issued for their arrests.

Pursuant to the issuing of warrants, Hamer sent word to the local lawmen to come down to the courthouse and surrender. When they arrived, Hamer told them to give their guns to one of his Rangers. However, the sheriff informed Hamer that they had all disarmed before coming down to surrender.

Hamer looked at the sheriff in disbelief and said, “Dammit! Y’all go home and get your guns and come down here and surrender like you’re supposed to!”

Transpecos Mule Deer
Thank God I Had A Gun