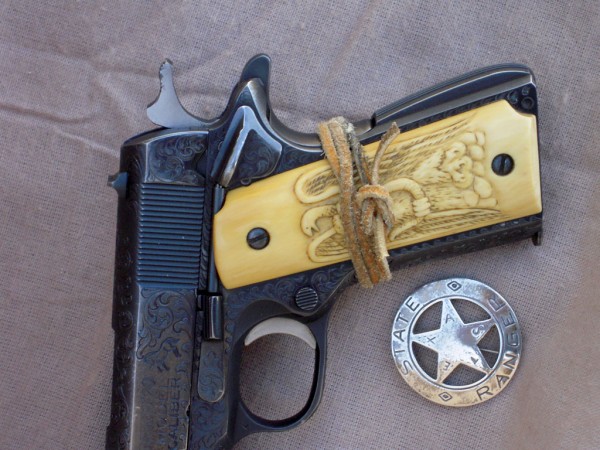 One of the most colorful Texas Rangers of the 20th Century was Charlie Miller (1893?-1971). He was born in Frio County, Texas, but they aren’t really sure about the year of his birth. You see, Charlie kept changing it when mandatory retirement drew near. But we do know that he was a Texas Ranger, off and on, from 1919 to 1968. He’s the one, you’ll remember me telling you, that was of the earliest Rangers to carry a Colt 1911. And he always tied down the grip safety with a piece of rawhide, as illustrated on my own 1911 that is pictured above.

I don’t want you to think that Charlie was tough, or anything, but Ranger Bob Favor told me about visiting him after Charlie retired. They were standing around, out by the barn, looking at some horses when one of Charlie’s teeth got to hurting him. Favor said that Charlie went into the tack room, grabbed some pliers and pulled the tooth, right then and there. Now that’s tough!

Charlie said that he lay there for a while and then hollered over to the outlaw. He told him that he knew he had hit him and that Charlie was hit, too. Were they both going to lie there and bleed to death, or were they going to stand up and finish it like men?

Charlie said, “And you know, that dumb son-of-a-bitch stood up!”

And then there was the time that a cafe wouldn’t serve Charlie a cup of coffee, so he just shot a hole in their coffee urn and served himself. But we’ll save that one for another time…

This 'n' That
The Ruger Shopkeeper
Five Beans in the Wheel