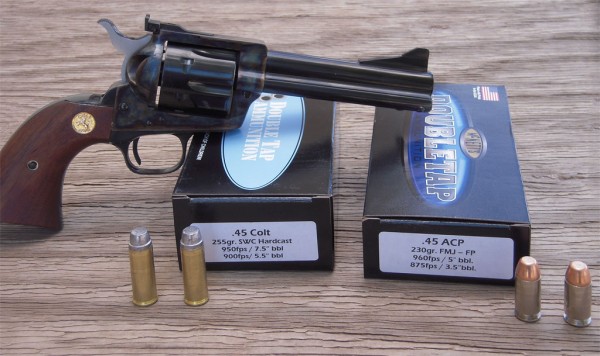 A while back, my friend and colleague Dick Williams got a group of gun writers together at Gunsite for the .45 SHOOT. We spent three days shooting .45 caliber guns from Colt, Ruger, and Smith & Wesson. As you can imagine, we had a great time. But the most fun part was that our ammunition was provided by Mike McNett’s DoubleTap Ammunition. All of the DoubleTap stuff worked great but their were two loads that really stood out.

The first was a .45 Colt load that featured a 255 gr. SWC hard-cast lead bullet that ran almost 900fps out of my 4 3/4-inch Colt New Frontier. Folks, this is the kind of load that helped the .45 Colt cartridge build its reputation. You see, the original .45 Colt black powder load ran almost 1,000fps in a 7 1/2-inch barreled gun. Not only was this DoubleTap ammo suitably powerful, but it was also extremely accurate, giving tight groups at 25 and even 65 yards. Other folks can play with those .45 “cowboy loads” that barely make it to the huge steel plates they use for targets. I want a .45 Colt load that will do for hunting, defense, and general woods bumming. And, my friends, this is it!

The second DoubleTap .45 load that earned my praise was his .45 ACP round that featured a 230 FMJ flat point bullet. This is the bullet that we used to call the Truncated Cone and was a great favorite of Col. Jeff Cooper. In fact, Cooper may have had a hand in its development. Other companies have packaged it in the past and then dropped it, unfortunately. DoubleTap’s version runs 960fps out of a 5-inch government model and 900fps out of a 4 1/4-inch Colt Commander. It’s a great fighting round and has also taken quite a bit of game, as Col. Cooper and others have proven.

I sure like to see smaller companies, like DoubleTap, doing well. These are the kind of folks who want to build the sort of ammunition that serious shooters are asking for. And I have to tell you that the power, accuracy, and quality, of such ammunition is top shelf in ever respect.