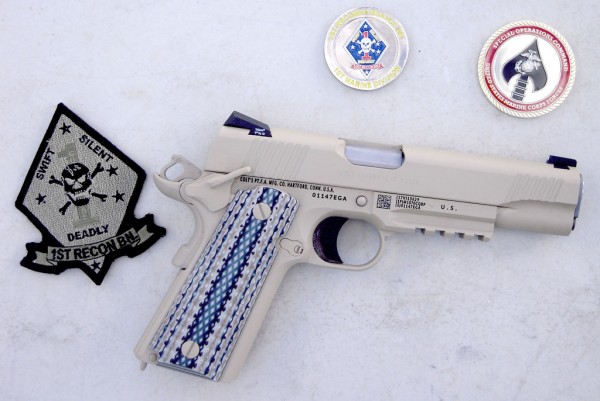 The United States Marine Corps recently let a contract with Colt Firearms for a quantity of 1911 pistols. This comes as no surprise to most of us since the rumor has abounded for some time that the Marines were getting their hands on every 1911 that they could find in the US arsenals. It appears that the Marines know a fighting pistol when they see one.

The new Colt is actually a version of the M1911A1 Rail Gun which the Marines will call the M45CQB pistol. The gun is a stainless pistol with a Cerakote finish that we have decided should be called Coyote Tan. It features night sights, match barrel & bushing, and laminated wood stocks. It also has the double recoil spring as found on Colt’s Delta Elite 10mm pistol. I am told that the double-spring set up was necessitated because the Marines wanted the dust cover relieved as much as possible to cut down on the weight of the pistol. This necessitated using the double-spring arrangement to keep the spring from kinking.

At a recent Colt-Gunsite event we shot the M45 and found that it was quite accurate and reliable. Among other stipulations, the Marines had requested that the pistol be capable of firing 2-inch groups at 25 yards. It’s a fine pistol and I am so pleased that at least some of our fighting men will now have a proper fighting pistol on their hips.

The good news is that you can own the same gun. Colt is marketing the same 1911A1 Rail Gun for commercial sales. Thanks to the good folks at Colt, you can now own a true piece of history.

83 Responses to The Marine Corps Colt