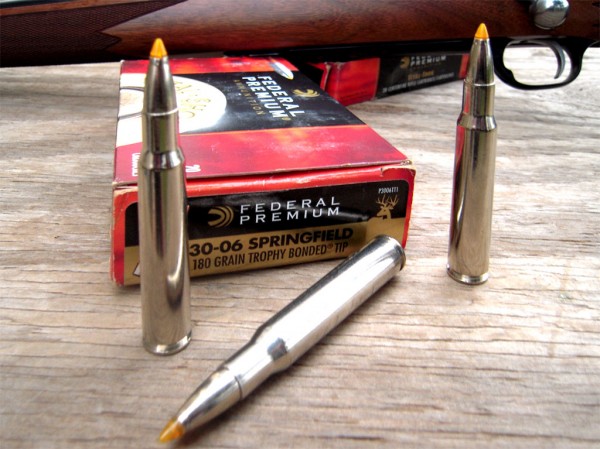 The .30/06 Springfield is one of the greatest cartridges ever developed in America. Like many of our great cartridges, the .30/06 began life as a military round. Following the Spanish American War, the Army was re-evaluating its weaponry and spent a lot of time studying the 7×57 cartridge that was used by the Spanish. The .30/06 is an upscaled version of that great European round. By the way, the European designation for our treasured ’06 is 7.62x63mm.

Introduced in 1906, the .30/06 featured a 150 gr spitzer flat-based bullet running at 2700fps out of the Springfield rifle. The cartridge served us in both world wars, the Korean War, and the Vietnam conflict. The round quickly gained favor in the civilian market and can be found loaded with bullets that run the gamut from 110 grains to 220 grains in weight.

Now, 106 years after its birth, the .30/06 remains extremely popular, primarily due to its combination of accuracy and power, although accuracy is really derived from the combination of cartridge and a suitable rifle. In a suitable rifle, the recoil is modest enough that most shooters find it quite manageable. In skilled hands, the .30/06 has taken everything on the North American continent as well as everything in Africa. While it is generally more power than is needed for whitetail deer and not a good choice for big bear or African elephant, the old ’06 has done its part to help bag them all. Even today, if a store in Podunk, Alaska, carries rifle ammunition, it will stock the .30/06.

I’ve probably taken more game with the .30/06 than any other rifle that I’ve owned. Being left handed, I got one of the first left-handed Remington Model 700’s that hit my dealer’s shelves. And, today, I rely on the cartridge in Ruger Model 77 Hawkeye.

50 years from now, while many other cartridges have come and gone, you will probably still find .30/06 ammo on your dealer’s shelves. It’s a grand old cartridge that delivers the goods!

Skeeter Skelton, You Like to Got Me in Trouble
Fit A Pistol Caliber Carbine into Your Defense Plan
The Object of Defensive-Gun Handling: Stop the Threat

78 Responses to Classic Cartridges: The .30/06 Springfield