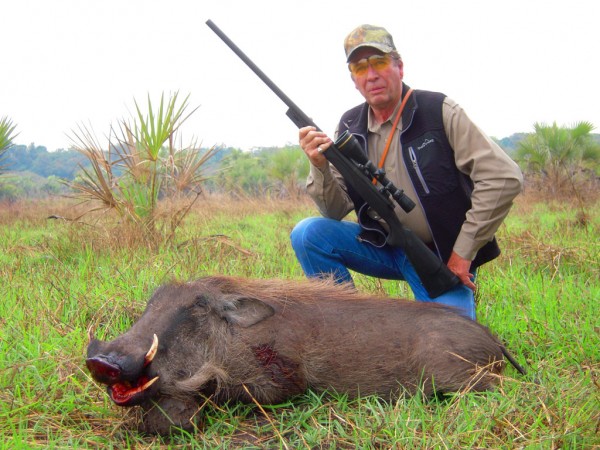 “Bullets kill by tissue destruction. They do not kill by shock.” Finn Aagaard

Since bullets are a disposable item, many hunters pay very little attention to them. Nor do they really understand what a bullet must do. This is a mistake.

The first task of a hunting bullet is to penetrate deep enough into a particular game animal to impact the vitals and create significant tissue damage. The hunting bullet must also expand, thereby creating even more tissue damage. The trouble is that expansion also slows down penetration. This is why bullets designed to expand on varmints don’t work so well on larger game like mule deer.

I recently posted this photo of an African warthog that I shot with a Remington 700 in .223. Some folks questioned my using so light a cartridge on a tough critter like this warthog. The reason that we got a one-shot kill was because of the bullet, not the caliber. In this case, the PH’s rifle happened to be loaded with 55 gr full-metal-jacketed ammo (it was what they were able to trade from the local police). Now we know that an FMJ bullet won’t expand, but this particular bullet is known to tumble when it impacts the resistance of a target. Thus, the tumbling caused the tissue damage needed to make a clean kill.

All of this is to remind the hunter that he should pay close attention to the kind of bullets that are loaded into the ammo that he is buying for the upcoming hunting season. Some bullets will work just fine on deer and pronghorn, but a differently constructed bullet is needed when your target is elk, moose, or bear.

Fortunately, the American ammo companies offer a pretty broad selection of bullets in their various hunting loads, especially in the more popular calibers. So it is important that you don’t just buy any old ammunition for that upcoming hunting trip. Take the time to be informed and buy ammo that has a bullet designed to create the most tissue damage, and proper penetration, in the game that you are going after. It is often the answer to a successful hunt.

Snake Country
Buff in the Swamp
Getting Ready