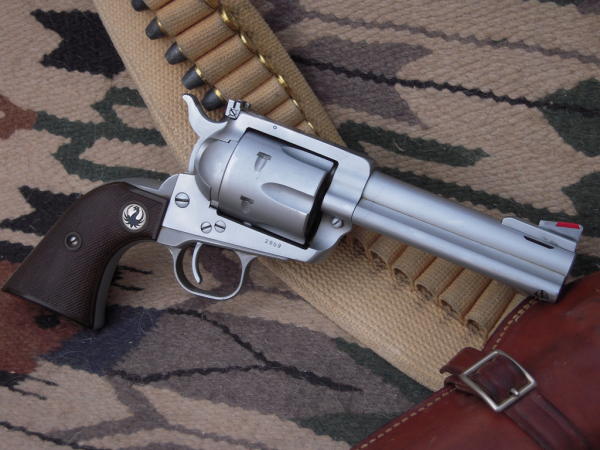 I have always been a fan of the original Ruger Blackhawks, the ones that have come to be called Flat Tops. This is especially true with the .44 Magnum Blackhawk. I just found this sixgun to be accurate, well balanced, and just the right size for the .44 Magnum cartridge. This early .44 Blackhawk came with a 6 1/2-inch barrel and a few were made with the 7 1/2-inch tube. While these lengths were great for hunting, their barrels made them a bit long for every-day packing.

Back in the early 1970’s, I found a used 6 1/2-inch .44 at the Dallas Gun Show and decided to have some custom work done on it to make it more portable. Not being the least bit handy with such things, I took my project to Lou Williamson, who had a gun shop in the Dallas area.

Lou began by cutting the barrel to 4 5/8-inches, flush with the ejector rod, and re-installing the front sight. Then he did a magnificent job of slicking up the action. I’m telling you, you don’t want to get on the trigger until you are ready to shoot. The Ruger was then sent off to Mag-Na-Port to be ported and, following that, the entire revolver was Armaloyed.

In retrospect, I should not have had the Ruger barrel ported. The .44 Magnum sixgun just doesn’t need porting to make it manageable and the upward blast of gases is a bit disconcerting.

I have no idea how many rounds had gone through this Ruger before I got it, but I can safely say that I have put about 20,000 rounds downrange since it became mine. It has accounted for whitetail deer, mule deer, javalina, turkey, feral hogs, a couple of coyotes, and quite a number of rattlesnakes.

Back when I was a Texas sheriff, the Ruger rode in the trunk of my county car. On the occasions that I had to get horseback I would take off my .45 auto and strap on the .44 single action. Single actions are much better handguns to wear when you are mounted.

It is still the gun I reach for when I’m heading into rough country. In all those adventures, the Ruger has never had a single broken part, though Hamilton Bowen re-timed it a few years ago.

Next week, Wayne Weimers and I are going to do a bit of aoudad hunting in the Chinati Mountains. I don’t know which rifle I will take, but you can bet I’ll be packing my .44 Flat Top.