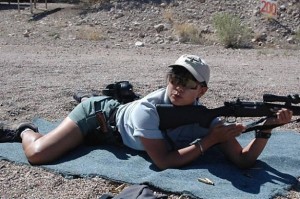 A knowledge of firearms, a no-nonsense approach to personal defense, advanced hunting skills, and the outstanding ability to teach those things to others, are what make Il Ling a special person in the field of firearms training. She takes her work seriously and she works hard. My hat is off to Il Ling and to the sportsmen & sportswomen of California for recognizing her value to our industry. Way to go, Il Ling!!! -SJW

Il Ling New, America’s No. 1 female firearms instructor and hunting guide, was the top vote-getter in this year’s balloting for the California’s Outdoors Hall of Fame.

New was inducted at a ceremony Saturday at the Sacramento International Sportsmen’s Exposition, which ends a four-day run this weekend at Cal Expo.

Anybody can nominate a candidate for the Hall of Fame. The award is based on a vote of past winners and leaders in the outdoor industry, media and government, free of any faction. All candidates must fill two requirements:

For information, go to http://caloutdoorshalloffame.org

Il Ling New
Born in San Francisco and a Yale graduate with an MBA, she turned her back on a lucrative marketing career to teach people self-protection, how to handle firearms, and hunting. She is America’s No. 1 female firearms instructor and No. 1 female freelance guide. She has hunted across the hemisphere and to Africa twice, including for Cape buffalo, and trains hunters from across the hemisphere prior to world-class expeditions. She has hunted ducks in California since age 10. As an instructor, she has had a profound influence on people across America, and has taught Marines and police as well as housewives and hunters of all backgrounds. Her skills are world-renowned; with a handgun small enough to fit in her palm, she can put three shots in a pie plate in 5 seconds, has competed nationally for skeet titles, and is versed as an expert in all rifles. She has a stunning ability to improve others’ skills and safety. Named on more than 75 percent of ballots.

Read the rest if the article at SF Gate.

This entry was posted in Hunting, News. Bookmark the permalink.