I spent several days last week in Tombstone, Arizona. I was there at the request of Michael Bane to film a story about the OK Corral fight for his Shooting Gallery TV show. Michael pointed out that, with all the books, movies, and TV shows, about the famous fight, no one had ever sat down with some peace officers, folks who knew something about gunfighting, and studied the event. Besides myself, there was Larry Mudgett (retired LAPD SWAT & Gunsite Instructor), and Phil Spangenberger (Old West firearms expert). We did our best to shine the spotlight of realism on the Earps’ shootout with the Clantons and the McLaurys. 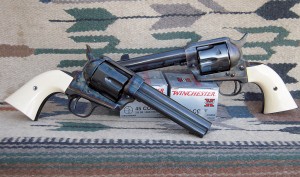 Of course, you know that the OK Corral gunfight did not occur in the OK Corral. It actually happened in a vacant lot on Fremont Street, about six lots north of the corral’s back exit. I suspect the actual site is under the pavement now.

It surprised me that a lot of the people we talked to tended to be more effected by the movie, “Tombstone,” than the history books. Kurt Russell starred in that movie some 18 years ago. And, for what it’s worth, I didn’t find anyone who thought that Kevin Costner’s “Wyatt Earp” movie was anywhere near as good. Frankly, I doubt that Wyatt would have thought very much of either flick.

It sort of amazes me that this one gunfight has held the interest of western buffs as long as it has. Commodore Perry Owen’s shootout in Holbrook, or Dallas Stoudenmire’s fight outside the El Paso courtroom, were just as interesting, but folks have hardly heard of those.

One thing’s for sure, though, some things change and some things never change. If Wyatt Earp came back today, he might have a hard time getting used to a Glock auto pistol. But he would understand Bill Clinton in a heartbeat.

Catch our show Shooting Gallery on the Outdoor Channel. It’ll run in the first quarter of 2012.