John M. Browning tops the list of people I would have loved to have known and interviewed. The list of his firearm inventions is as long as it is impressive. And they all came out of his little Utah shop, which was mighty crude by today’s standards. However, for all of his great designs, nothing in my book tops his invention of the .45-caliber 1911 pistol. It is one of—if not the—greatest, fighting pistols we’ve ever known.

For more than 60 years, the U.S. Military relied on some sort revolver as the sidearm for its troops. However, in the early 1900s it conducted trials that allowed inventors to submit a semi-automatic handgun. Browning was just one of many who submitted a pistol for this evaluation. His offering passed military tests with flying colors and, along with the new .45 ACP cartridge, became the standard issue of our military forces. The 1911 was born.
Advertisement

The first real field test of the new pistol came in 1916, when Pancho Villa attacked the sleepy little New Mexico town of Columbus. “Black Jack” Pershing’s punitive expedition put the 1911 to the test in the rough climate of the desert Southwest. It was found that the .45 ACP cartridge was adequately powerful and the new pistol was easy to field-strip and maintain. The 1911 went on to add to its glory in the brutal European conflict that came to be called World War I. 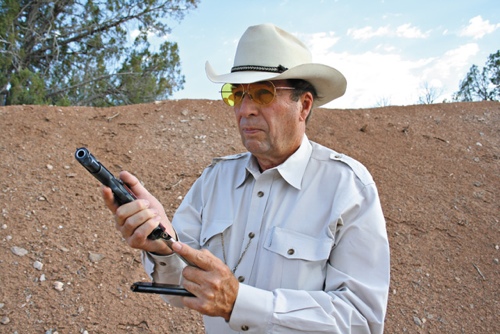