So you just woke up to the thing that you’ve dreaded the most. Something went bump in the night. Actually, it sounded like the glass in your patio door being shattered and now you hear footsteps and voices. No doubt about it, you are about to experience a home invasion. 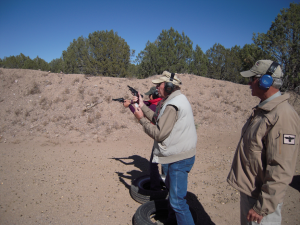 But, you’re not real worried because you and your wife both have pistols. And, heck, you just went shooting a few months ago. Of course, the weather was bad and you really didn’t get to practice very long. And, now that you think of it, the two of you never got around to making any plans for dealing with a criminal attack. And you also never got around to working out a system of communication during such an attack so that you keep up with each other and what you both are thinking. Oh, and shouldn’t one of you be calling 911? And where is that damned phone anyway?

If you find yourself in that sort of situation, you are in for the kind of on-the-job training that no one really wants to be a part of. People mean well, but they tend to put this sort of thing off. After all, no one wants to spend time dwelling on the really bad things that might happen in today’s society.

Fortunately, the Gunsite Academy (located in Arizona, north of Prescott) understands the sort of concerns that couples have. And they have designed a class that helps a couple become equal partners in protecting their own lives and property. It’s called Team Tactics For Two.

Besides improving your basic shooting skills, the class is designed to help a couple communicate, both verbally and by hand signals. It helps you work out tactics that allow you to protect each other equally (the wife becomes a partner instead of being a dependent). And it helps you build confidence for your defensive plan through experiencing force-on-force exercises, using Simunitions, and role playing with bad guys.

Gunsite has their 2012 class schedule posted at www.gunsite.com. Check it out and get you and your spouse enrolled in a Team Tactics For Two class. You won’t regret it.

This entry was posted in Personal Defense. Bookmark the permalink.