There’s no doubt that the defensive shotgun is an awesome weapon. A load of buckshot–or slug–placed properly will usually give the bad guy extremely celestial thoughts. We used to say that his case would be pled to a Higher Court. 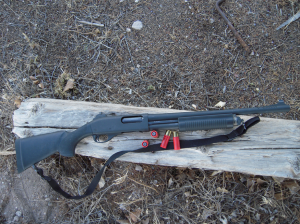 Unfortunately, few people ever go to the trouble to pattern test their shotguns and they haven’t a clue how their gun will perform at a given distance with a given load. When the shot leaves the barrel, it will function almost as a single projectile out to somewhere around 10 yards. Beyond that, the pellets will begin to spread and, at around 20 yards, some of the pellets will fail to stay on a man’s chest. Considering the fact that you are going to be held responsible for each and every pellet that leaves your shotgun muzzle, it might be a grand idea to do some pattern testing with various brands of buckshot loads.

At the point that the buckshot won’t stay on a man’s chest, it might be a really good idea to transition to a shotgun slug. There’s a little trick to doing this quickly and efficiently with your pump shotgun.

From Cruiser Ready (empty chamber & full magazine), it is necessary to create room in the magazine for your slug load. Step One is to rack the slide and chamber one of the buckshot rounds. Step Two is to load the slug round into the magazine. Step Three is to open the pump’s action by accessing the action-release lever, ejecting the buckshot load. Step Four is to close the action, thereby chambering the slug load. You are now ready to deliver the slug round downrange, should the bad guy still need attention.

This technique is much faster and much more certain than trying to load and unload through the ejection port. Trying to work rounds in and out of the ejection port takes more time and will generally result in a double feed.

The smart defensive shotgunner will get himself some dummy rounds (Brownells has them) and practice this technique several times in dry practice. In no time, it will become almost second nature and allow you to apply shotgun slugs to the defensive problem very quickly. Shotgun slugs, by the way, can be effectively delivered to a man-size target at surprising distances.

5 Responses to The Select Slug Drill