The .44 Magnum cartridge is a direct descendent of the .44 Special cartridge, another great classic. Years ago, a group called “The .44 Associates” began to experiment with improved loads for the old .44 Special. The factory loads pushed a 246 grain bullet at 750fps and these big-bore advocates knew that they could get greater velocity and performance through judicious handloading.

One of these folks was Elmer Keith, a cowboy turned gun writer, who experimented with .44 Special handloads in his Colt single actions, Colt New Service, and N-frame Smith & Wesson revolvers. Keith designed a great bullet for the .44 (Lyman #429421) and began to work towards developing accurate, powerful loads. He found that he could safely push this bullet up to 1250fps in large-frame revolvers.

Along in the early 1950’s, Keith several magazine articles about his .44 developments and began to 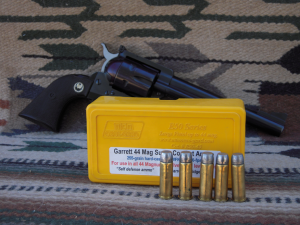 campaign the gun & ammo companies to give him this improved .44 Special load in factory ammunition. Of course, the companies were scared to death that if they manufactured such a load someone would stick it in a small-frame .44, or a gun of poor manufacture, and blow it up. Finally, however, Keith got a commitment from Remington and Smith & Wesson to see what they could do.

The solution was to make the cartridge just a little bit longer, so that it would not chamber in .44 Special guns. At the same time, Smith & Wesson chambered their big-bore, N-frame revolver, with target sights, for the project.

By 1955, the companies were producing guns & ammo and calling the result the .44 Magnum. Early ammo used soft lead SWC bullets and stuff clocked out at 1500-1600fps. In the meantime, Bill Ruger had gotten his hands on some of the empty brass and soon figured out what was going on. He slightly enlarged the frame of his .357 Flat Top single action and built the .44 Flat Top, what some of us consider the finest revolver ever to leave the Ruger plant.

Over the years, the .44 Magnum cartridge has become a mainstay of American handgunners. It is powerful, yet accurate, and will take just about any North American game (though I wouldn’t care to hunt grizzly with it). And Clint Eastwood‘s “Dirty Harry” character sure didn’t hurt .44 Magnum sales, either.

4 Responses to Classic Cartridges: The .44 Magnum