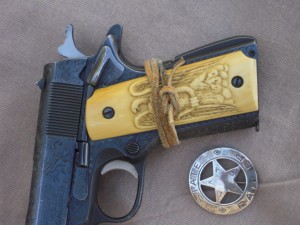 One of the most interesting of the old-time Texas Rangers was Charles Edward “Charlie”Miller. Miller joined the Rangers in 1919 and retired in 1968, 49 years of service. During that time, due to Texas politics, Miller also served as a federal prohibition investigator and a Special Texas Ranger. But he will always be known for his Ranger service. Ranger captain A.Y. Allee once told me that Charlie Miller had killed 7 or 8 men in the line of duty and was justified in every case.

Mr. Miller was one of the first Rangers to see the value of the Colt 1911 pistol as a peace officer’s weapon. However, Miller had a severe dislike for the grip safety on the pistol. His solution was to tied the grip safety down with a length of rawhide. He also carried his pistol with a round in the chamber and the hammer on half cock (a practice that is definitely not recommended). To make matters even more interesting, Miller disdained the use of a holster and generally just carried the .45 auto shoved down in the front of his pants. In later years, his big belly pretty well made this a concealed-carry technique.

One time, during a firearms training session, a Texas DPS instructor saw Miller’s gun, with the tied down safety, and asked, “Mr. Miller, isn’t that dangerous?” Miller quickly shot back, “Son, if the damned old thing wasn’t dangerous, I wouldn’t be wearing it!”

One of my favorite Charlie Miller stories comes from a time that Miller shot it out with an outlaw down in the vega (river bottom) of the Rio Grande. They had hit each other and had both taken cover. Supposedly, Miller called over to the outlaw and said they were going to both lie there and bleed to death, so why didn’t they just stand up and finish it like men. Miller shook his head and related, “And you know what? That damned fool stood up!”

Charlie Miller is a legend in the annals of the Texas Rangers. Like a lot of good peace officers, his gunfights never soured his disposition and friends across Texas were legion. Charlie Miller is buried in the Texas State cemetery, next to his long-time friend and commander, Col. Homer Garrison. A Texas legend; and he did it with a Colt 1911.