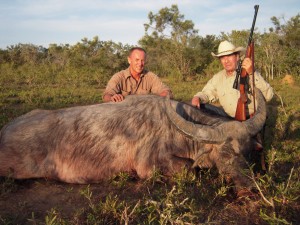 I killed the big Asian buffalo bull, pictured above, in 2009, while hunting in Australia’s Northern Territory with Simon Kyle-Little from Australian Big Game Safaris. He was taken with a Ruger #1H, chambered for one of the truly classic cartridges of all time, the .375 H&H.

The .375 H & H cartridge was introduced in 1912 by the English gun firm of Holland & Holland. It was one of the first belted cartridges ever presented to the public. Much confusion exists over the use of a belt on this cartridge, and all of the belted magnums that have come along since then. Some believe that the belt was designed to improve headspacing, due to the tapered shoulder of the case. However, others say that the belt was designed so that this rimless cartridge would extract properly from double rifles.

The .375 H&H cartridge became a favorite for a number of good reasons. It operates at a relatively low pressure, which is always a consideration when hunting in tropical countries where the heat can cause pressure spikes. Sticky extraction is not a thing one really wants to experience when a cape buffalo is about to get in your pocket. The cartridge also has a mild enough recoil that most hunters can learn to handle it effectively and accurately. Today, most African countries list the .375 H&H as the minimum cartridge that is allowed for use on dangerous game.

Using 235-270 grain bullets, running as hot as 2900fps, the .375 H&H is a great choice for light to medium game. You can bet that it will drop an elk or moose on the spot when your bullet is properly placed. And, moving up to the 300-350 grain bullets, at 2300-2500fps, it will do the job on buffalo, bison, and grizzly, with effective suddenness. It has even been used to take African elephant. Though I’ve never shot an African elephant, and probably never will, I think I would want a heavier caliber for that chore.

When hunting dangerous game, it is important to use ammo that is crafted with a premium bullet. I’ve personally had great luck with the Barnes TSX, in 350 grain from Barnes Bullets, and the 300 grain Swift A-frame bullets. And I’ve heard good things about the good Bear Claw bullets from Federal.

From Africa to Alaska, the .375 H&H has gained a great reputation for stopping big game animals, especially those that tend to fight back. And, by the way, this grand old cartridge will be celebrating its 100th birthday this next year. I think I’ll just help it celebrate by taking it to Mozambique to collect a cape buffalo. It just seems like the right thing to do.

This entry was posted in Ammunition, Classic Cartridges, Guns, Hunting. Bookmark the permalink.

One Response to Classic Cartridges: The .375 Holland & Holland