I have no idea when the custom of embellishing handguns began. I would suspect that it had its beginning when Col. Sam Colt began to make up special presentation models of his popular percussion revolvers. If he didn’t come up with the idea, he certainly made good use of it.

Here in the Southwest it has long been the tradition to trick out a favorite handgun with some tasteful engraving and fancy stocks. One has only to look at 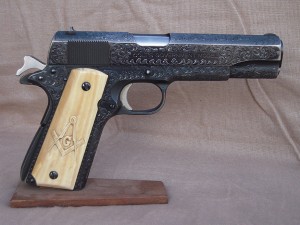 the likes of Frank Hamer, Bill Tilghman, Pat Garrett, and Gen. George Patton (he got his famous single action in El Paso), to name just a few. During my career I ran into numerous lawmen who packed fancy guns, and they weren’t just for show, either. And, by the way, I’ve never heard a legitimate border gunman call them “Barbecue Guns,” either.

Back in the 1970s, I had Weldon Bledsoe engrave a Colt Single Action Army for me. It was a nice gun, but not one that I carried very often on duty. What I really wanted was an engraved 1911. After a few false starts, I happened to find out that the Colt Custom Shop had a bunch of nice guns for sale and I hurried to get a look at the list. One of the guns listed was a Government Model .45, with factory-”D” engraving, and a blued finish. “D” engraving, by the way, denotes full scroll coverage. I think I had to pay $750 for the pistol.

Of course, a nicely engraved gun needs something besides the checkered wooden stocks that came on mine. So I contacted the Gun-Art Company and ordered some carved elephant ivory. The right stock was to have the Masonic square & compass on it, while the left stock was to display the Scottish Rite double eagle.

The ivory stocks arrived in due course, and I was surprised to discover that they had mistakenly carved the Mexican eagle & snake on the left panel. Not a problem, because I was soon working down in the border country and just told folks that the left grip panel was to honor my Mexican friends. That was not quite the truth, but was certainly politically sound. For the record, the Colt factory letter shows that my pistol was shipped in May of 1978, to Abilene, Texas. Unfortunately, the engraver’s name was not listed. So I don’t know if the beautiful scroll engraving was done by a Colt employee, or farmed out to an independent engraver. I wish I could thank him for his great work and tell him about the gun’s adventures in the Texas border country.

I’ve never had much use for guns just hanging on the wall, so I made a commitment to wear and use this beautiful Colt. I had it on my hip both times that I was sworn in as Sheriff of Crockett County, Texas. And it was my frequent companion on many a border country adventure.

Embellished guns are a nice way to honor our profession. But, please don’t call them Barbecue Guns!

5 Responses to A Classy Colt