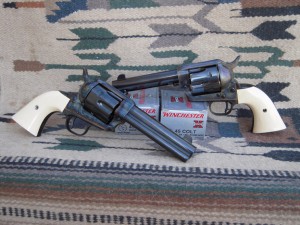 The .45 Colt cartridge was actually the beginning of the search for effective big-bore handgun cartridges. And this 139-year-old cartridge is still around because it is as effective and useful as it was in the days of the American frontier.

Designed in 1872, the .45 Colt cartridge featured a 250 gr lead bullet over some 40 grains of black powder, driving along at about 1,000fps from a 7 1/2-inch barrel. And, of course, it didn’t hurt the cartridge’s popularity that it was designed for one of the greatest handguns of all time, the Colt Single Action Army revolver. The combination of a sturdy, accurate revolver and a powerful cartridge was the sort of thing that the old timers demanded when their lives were on the line. Interestingly enough, the .45 Colt was never chambered in the Winchester rifle, as many other Colt cartridges were, until the advent of modern cowboy action shooting.

When smokeless powder came onto the scene, the .45 Colt cartridge consisted of a 255 gr lead bullet with a velocity of some 850fps. Modern ammunition manufacturers have gilded the lily, somewhat, by offering a variety of power levels in the old cartridge. Cowboy Action ammo runs about 750fps, while the various defensive and hunting loads push the power and performance level of the .45 Colt considerably higher. Cor-Bon, Double Tap, and Buffalo Bore, are just a few of the companies that offer high performance loads in this great caliber.

For serious business, you can’t go wrong with a 250 gr. Keith SWC loaded to 900-950fps. And, for handgun hunting it’s hard to beat a 300 gr. SWC (or heavier) bullet that runs about 1300fps. The key is to be sure and match the ammo to the type of handgun that is chambered in .45 Colt. Colt revolvers, Colt clones, and similar handguns, are designed to operate at about 14,000 psi. The hefty revolvers, like the Ruger and Freedom Arms guns, can handle much higher pressures, around the 25,000 psi range.

The grand old .45 Colt cartridge exists today because it is a powerful, useful cartridge. Sure, some folks like it because of its western history on the hips of such folks as Wyatt Earp, Bill Tilghman, and Pat Garrett. But, still others find the .45 Colt to be quite useful as a defensive and handgun hunting round. The word “classic” is often misused, but not when you’re talking about the great .45 Colt.

One Response to The .45 Colt: A History