On the Trail of the Australian Wild Ox 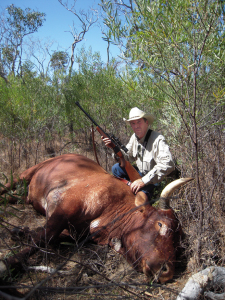 The Australian wild ox is one of several bovine that the British released in northern Australia about 1850. The big bulls run 1800 to 2000 pounds and are as wild and spooky as a Texas whitetail buck. Not long ago, I had the chance to hunt the wild ox, along with Il Ling New, in Australia’s Northern Territory, near where the Walker River runs into the ocean. Our PH was Simon Kyle-Little of Australian Big Game Safaris.

Hunting into the thick brush of a coastal swamp, we jumped a huge bull that had heard us, but not smelled us. He crossed from left to right, just in front of us, though the brush was so thick that I couldn’t see the entire animal. Following his trail, we quickly encountered the big fellow as he stood, concealed in the brush, watching his back trail.

Dropping to a kneeling position, I could only see the left side of his head, a massive horn, and the left side of this chest. Centering my crosshairs on his chest, I let him have a .375 H&H round, did a quick speed load, and gave him a second one in the right shoulder as he lunged forward and turned. At the same time, Simon ran in from the left and gave him another .375 in his spine, at the base of the tail. Our hunt was successfully over.

My Ruger #1H was loaded with a handload that consisted of a 350 grain Barnes TSX bullet. Barnes had just come out with this heavier weight in .375 caliber and was interested to see how it performed on game. Besides the wild ox, Il Ling and I took eight head of Asian buffalo on this same hunt, using this 350 grain TSX, and I can tell you that it lived up to its expectations. Penetration was excellent, expansion was perfect, and not a single bullet broke up or even lost a petal from the expanding tip.

2 Responses to On the Trail of the Australian Wild Ox