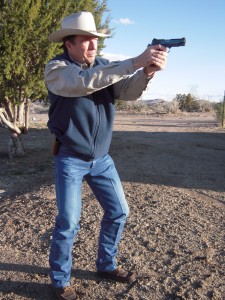 WELCOME FRIENDS… Since I updated my web site your response has been terrific. This site is being visited by just over 1,000 people each month and we’re having some excellent response. As you might imagine, I am somewhat challenged when it comes to just about anything having to do with computers. The success of this site is due entirely to the good work of my site manager, Mr. Carlos Vazquez. If you are wanting to create your own web site, blog, or whatever, you might visit with Carlos and discuss your plans with him. I think you’ll be very pleased to have him onboard with your project.

REMINGTON 1911… With the birthday of the 1911 pistol just right around the corner, I expect you will see and hear a lot about this great old pistol in the coming months. It is still the most popular handgun in this country, and one of the most popular in the entire world. In light of that, Remington is introducing their own 1911 pistol. Back in the early 1900’s, Remington was one of the companies that was contracted to build the 1911 during WWI. Now, working out of their Ilion, NY, plant, Remington will again be offering a nice 1911 in .45 ACP. I recently put several of these pistols through their paces and did a feature article for Shooting Illustrated on the results of those tests. That article will be out shortly.

SHOOTING ILLUSTRATED… Speaking of Shooting Illustrated magazine, I write a personal defense column (Straight Talk) in each issue and do several feature stories each year. My colleagues on the magazine include Wiley Clapp, Dick Williams, Rick Hacker, Richard Mann, and others. Shooting Illustrated is an NRA publication that is not included in your NRA membership. You’ve got to buy it on the newsstand or, better yet, subscribe to it. Subscription is only $9.95 per year. You can subscribe online or call 877-223-3840. We’d love to have you as part of our shooting family.

STARBUCKS… As most of you know, Starbucks has come under fire from the anti-gun crowd. It seems that Starbucks won’t ban guns in their stores. They are simply saying that all pertinent state and local laws should be respected in whatever state and city the Starbucks store happens to be located. In other words, Starbucks is their to sell coffee and service their customers, not make a political statement. So, for minding their own business and not yours, Starbucks is the target of the anti-gunners. It is very important that you take the time to stop by your local Starbucks and thank the store manager for their corporate position. Failing that, visit them online and express your thanks. Businesses, like Starbucks, needs to know that we appreciate their not caving in to the bullying tactics of the anti-gun crowd.

ARIZONA CARRY LAWS… This last week (March 16) the governor of Arizona signed into law a bill that would allow concealed carry and open carry in that state without the need for a license or permit. This makes Arizona just the third state to trust their citizens in such a manner (Alaska & Vermont are the other two). It appears that Arizona will continue to issue concealed-carry licenses for those residents who want to maintain reciprocal rights in other states. The new law will go into effect in late July, or early August. Texas also had a similar bill introduced in this year’s legislature, but I don’t know what the current status of that bill is. If the Texas bill doesn’t pass this time around, you can expect it to be re-introduced in the near future. Our thanks to Arizona for leading the way!

SINGLE-ACTION DEFENSE CLASS… The Gunsite Academy will be hosting a Single-Action Defense class May 3-5, 2010. This class is designed to help the student learn to apply the Modern Technique of the Pistol to the single-action revolver. The old thumb-buster is still mighty popular with cowboy-action shooters, woodsmen, modern-day cowboys, and handgun hunters. The class will help the shooter to better defend himself should the need arise while he is carrying a single-action. For information and to reserve your spot in the class, call Mr. Ed Head at 928-636-4565. But don’t delay… time’s a-wasting!

UPCOMING ADVENTURES… For some years now I have wanted to get in on some of the high-volume dove and pigeon shooting down Argentina way. This July, thanks to Remington, I’ll be doing just that. Remington is coming out with a new shotgun (if I told you more I’d have to kill you) and we are going to give it the field test on Argentine birds. Then, in August, Il Ling New, Dr. Dean Taylor, and I, will be heading back to Australia for another great buffalo hunt with our friend Simon Kyle-Little of Australian Big Safaris. The tribal forests and swamps of East Arnhem Land have got lots of buffalo, some of which are huge trophies. And Simon’s camp on the banks of the Walker River is just the perfect setting to enjoy the whole Australian hunting experience. And, you can do Simon’s buffalo hunt (or wild ox hunts) for a whole heckuva lot cheaper than you can do a cape buffalo in Africa. This fall I’ll be hunting whitetail deer with my amigo Joe Coogan, and the Beretta TV crew, in Texas. I’ll also join Mike Fifer (CEO of Ruger) and the Ruger executives for a West Texas aoudad hunt.

So, thanks for visiting my Web site. If you have any questions, or comments, please let me know. I’d enjoy the visit.

This entry was posted in Adventures, Guns, News. Bookmark the permalink.

2 Responses to This ‘n’ That