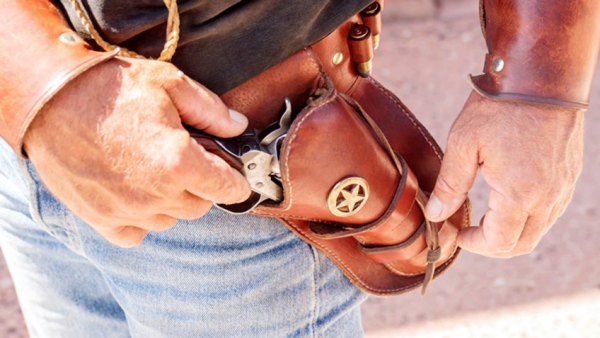 In 1965, my friend, the late Bill Cooksey, was sheriff of Terrell County, Texas. The area is big ranch country that sits on the Rio Grande River and is bordered on the east by the Pecos River. Cooksey was a career lawman who was known to be exceptionally good with a gun. He was fast. He was accurate. And he had survived at least one previous gunfight. What happened to him that fateful day just shows what could happen to any of us when we drop our guard.

A rancher contacted Sheriff Cooksey and reported that he had discovered that a man was camping in one of the ranch pastures. There had been some minor burglaries and thefts in the area and everyone suspected that it was the work of illegal aliens that often crossed the county, coming out of Mexico. Back in those days, these folks were a problem, but rarely dangerous. Cooksey suspected that this trespasser was an alien and probably responsible for the minor crime wave.

Not considering this a serious incident, the sheriff failed to strap on his gunbelt with his Smith & Wesson .357 Magnum. Instead, he picked up his small off-duty semi-automatic and stuffed it into his waistband in crossdraw position.

Arriving in the pasture, the sheriff and the rancher soon came upon the suspect who was, in fact, an illegal alien. After talking to the suspect for a few minutes, Cooksey told the man to take them to his camp and the group started out, single file, along a trail.

Suddenly, the suspect spun around with a .38 Special revolver in his hand and started shooting. He hit Sheriff Cooksey high in the chest, impacting a lung. His second shot hit the officer in the left thigh. Cooksey might have outdrawn and outshot the suspect, but his right hand had gone to his right hip where his magnum revolver usually rode. In the excitement, he had forgotten that his little auto was on the other side of his body. Cooksey went down and the suspect made good his escape.

“In the excitement, he had forgotten that his little auto was on the other side of his body.”

Cooksey survived his wounds. And the suspect was later shot, captured, and sent to the Texas penitentiary. While the sheriff’s lung wound healed up, the leg wound had damaged a nerve and caused pain for the rest of Bill’s life.

Sheriff Cooksey made several serious mistakes that day. In his later career as a law enforcement instructor at Odessa College, Cooksey talked freely about his mistakes, what he should have done and what he shouldn’t have done. Many of his comments are lessons that the armed citizen is well advised to take notice of.

While the detaining and searching of a suspect is never a good idea for the armed citizen, it is well to keep in mind that we should never take our eyes off of the suspect, or relax our guard, until we know for a fact that he is not armed or he has left the area.

Bill also made the obvious mistake of carrying a different gun and carrying it in a different location than usual. In a moment of excitement, we may well forget where we have stashed our gun and how that particular gun functions. Cooksey went to the ground reaching for a gun that wasn’t there. And if that can happen to a seasoned lawman, it can certainly happen to the armed citizen.

Finally, Sheriff Cooksey made the mistake of not taking the whole thing seriously enough. After all, it was only an illegal alien, not some mass murderer or bank robber. When we are dealing with suspicious situations and suspect the possibility of a criminal attack, we should be on our guard. That doesn’t mean that we draw our gun, but we are certainly ready to should the situation go south.

If Sheriff Cooksey were alive today, he would tell you to always be alert and never, ever drop your guard.