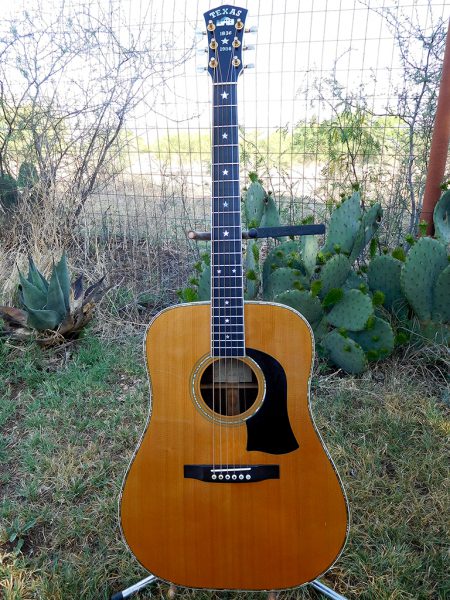 Mossman guitars were first built by Stuart Mossman, in Winfield, Kansas, from 1968 to 1984. Mossman was a stickler for using the best materials and the best construction methods for these custom guitars. He had nothing but disdain for the cheap guitars that were being turned out at the time and set his sights to compete with Martin guitars, which were considered the leader in the acoustic guitar field.

In 1984, Scott Baxendale, a Mossman employee, bought the company and moved production to Dallas, Texas. Baxendale owned the company until about 1989, and is only believed to have built slightly over 100 guitars. The company was then sold to John Kinsey & Bob Casey and moved to Sulphur Springs, Texas. I don’t know if they are still in business. 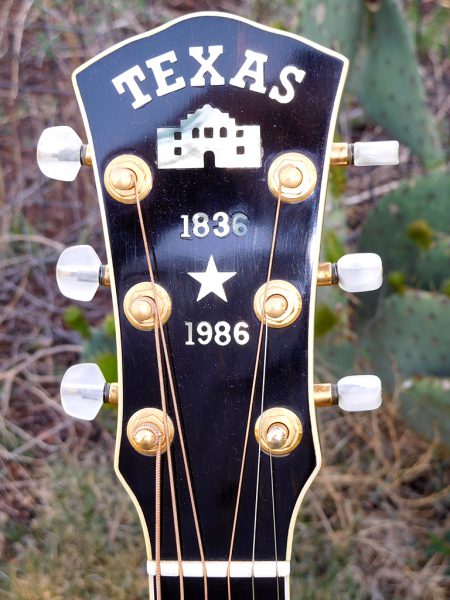 About 1986, Baxendale decided to build 15 guitars that would celebrate the Texas Sesquicentennial (1836 to 1986). The guitar pictured is #1 of that 15-guitar series. It is a blonde dreadnought with solid rosewood back and sides. On the headstock is “TEXAS” inlayed in abalone with the Alamo and “1836 to 1986”, all inlayed in abalone. In addition the guitar body and sound hole are trimmed in abalone.

Some time prior to 2000, Baxendale sold or traded the guitar to Mark Pollock, who owned Charlie’s Guitar Shop in Dallas, Texas. Pollock later moved to Alpine, Texas, and operated Transpecos Guitars. Pollock died in 2015, and I bought the guitar from his estate. 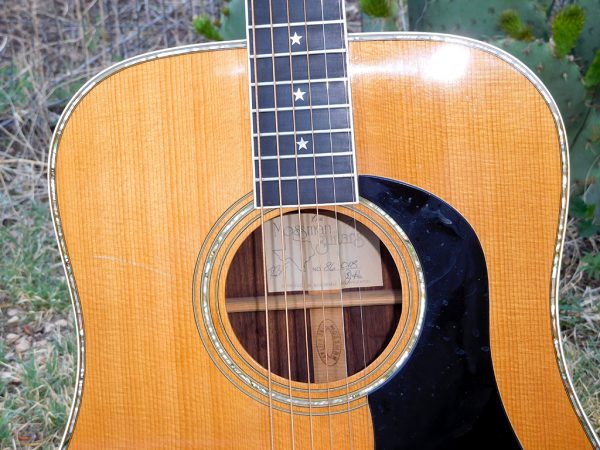 In 2016, I sent the guitar to Scott Baxendale, now operating a shop in Athens, Georgia, for a neck reset. Since Baxendale was the original builder, I felt that he would be the one to do the reset, maintaining the integrity of such a nice instrument. Baxendale told me that, of the Sesquicentennial guitars, others were owned by Jorma Kaukonen, Joe Walsh, John Mellencamp, and James Burton. Interestingly, Red Steagall also owns and plays Mossman guitars, though, to my knowledge, does not own a sesquicentennial model.

This Sesquicentennial Model #1 is a booming guitar. The neck is thin and slim and the body is lightweight. Altogether, it is a flat-picker’s dream guitar.

I feel fortunate to have such a nice guitar that was actually built in Texas. It is also pretty cool to own an acoustic guitar that once belonged to my amigo, Mark Pollock. Other guitar pickers will understand the connection that we have through this wood box that makes such great music.

This entry was posted in Music and tagged Guitar, Mossman, texas. Bookmark the permalink.