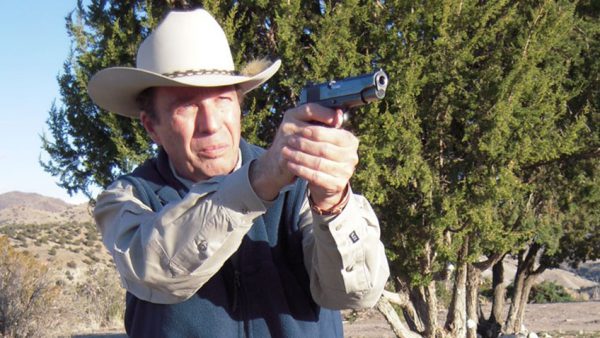 Although the “El Presidente” shooting drill was devised some years ago, it is still an excellent way for the defensive shooter to test his or her skills and, hopefully, document improvement in his training and practice. It requires three targets, 12 rounds of ammunition and a timing device.

Targets are place side by side, approximately one yard apart. Regardless of the type of targets used, they should have an 8” circle in the center to designate the vital zone. As a skill test, only hits inside this vital zone will count.

The shooter stands at 10 yards with his back to the targets. At the command, the shooter turns, draws, and shoots each target twice. He then executes a speed reload and shoots each target two more times to stop the clock. Pistol and extra ammunition should be carried in the manner that the shooter usually carries in public, including a covering garment if that is appropriate. When shooting a semi-automatic pistol, par for the drill is 10 seconds. When shooting a revolver, par for the drill is about 12 to 13 seconds.

This drill is occasionally used in competition and various systems are devised to award lesser points to hits outside the 8” circle. However, for various reasons that I will not get into in this article, this is not necessary for the defensive shooter using the El Presidente as a skill test.

You will notice that I have used the term “drill” instead of training or practice. This is because its greatest value is as a self-administered test, given periodically, to determine the shooter’s improvement in training and practice. Obviously, it tests the shooter’s ability to make a smooth quick draw and a fast, fumble-free reload. But it also tests the ability to manage recoil, transition to other targets, and to maintain a focus on the front sight. In addition, the shooter must have given thought to his footwork as he must spin and respond to the threat behind him. All of these skills are necessary in order to complete the drill successfully and quickly.

Ideally, the defensive shooter will spend time practicing the basics. Periodically, say every couple of months or so, he will put them all together in the form of the El Presidente to determine how much improvement he has made. Documenting the drill on video would be even more helpful in evaluating performance and isolating those areas that need special attention and improvement.

I don’t consider the El Presidente a training method for several reasons. To begin with, when faced by three armed attackers, the defensive shooter’s first consideration should be to create distance and get behind cover. To stand out in the open and elect to take on three armed threats is just a good way to get shot. When one examines where he lives, works and plays, he will find that there is all sorts of cover available that will stop bullets. Regular practice sessions should include a move to cover so that it becomes a regular part of the combat mind set.

The second issue that I have with the El Presidente when used as a practice method is the delivery of two shots to each target before transitioning to the next one. In my opinion, when faced with three or more attackers, it makes far more sense to get one bullet in each attacker as quickly as possible. One can then go back and deliver additional bullets to a particular threat if that appears to be necessary. Obviously, we are only dealing in seconds here, but it is important to remember that a lot of rounds can be sent downrange in only a few seconds. One should always keep in mind that rounds may, and probably will, be incoming during those few seconds, too.

In years past, gamesmen devised ways to award points to hits that were in the silhouette, but outside the vital zone circle. This allowed them to shoot faster and still possibly win the match. Thus, how fast they shot became almost as important as how well they shot. This is probably where the comment, “You can’t miss fast enough to win,” originated. From the beginning of his training and practice, the defensive shooter should be concerned with placing all of his shot into the vital zone of the threat. Speed will come with practice.

So the defensive shooter should be conscious of the difference between training, practice, and a performance drill. This is the main reason that the El Presidente should not be shot on a regular, routine basis, to the point that it becomes a habit. It is, however, an excellent drill to test certain skills and allow the shooter to note his improvement and identify areas that need further work.

This entry was posted in Personal Defense, Semi-Auto, Training and tagged drill, gunsite. Bookmark the permalink.