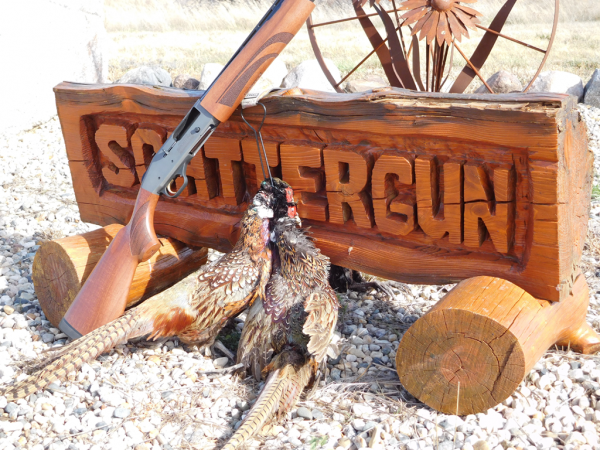 Chuck Ross is a true western character…and a darned good storyteller, too! More importantly, he is the head honcho at ScatterGun Lodge near Pierre, South Dakota. Chuck has been in the outdoor business, in one form or another, for most of his adult life. He’s a whiz with a shotgun, knows good hunting dogs, and knows how to make folks feel at home.

ScatterGun Lodge sits on several thousand acres of prime pheasant country in the hills above the Missouri River. The grain fields are laid out to give the best bird hunting opportunity. And good conservation techniques guarantee a nice mix of wild and pen-raised birds. Lots of cover and lots of natural feed are the key to good pheasant management and Chuck Ross has that all figured out.

The most amazing thing is the group of highly trained yellow Labs that accompany every group of hunters. They will find the birds and they will retrieve all of the birds, period. I really think that I could almost have a great day just following the dogs and never firing a shot. Almost!

The lodge itself is a wonderful facility. It’s clean, spotless, and very homey. It is also the workplace of a very fine chef. Now, I have hunted at places where the food was so fancy that I didn’t have a clue as to what I was eating, or why I’d want to eat it. I was pleased to see that these folks serve regular food—exceptionally well cooked—but regular food nonetheless. If you spend any time at ScatterGun Lodge and don’t gain weight, see your doctor immediately.

A week ago, I spent several days at ScatterGun Lodge, hunting as a guest of Mossberg. We hunted with the Mossberg Model 930 Sporting shotgun and used Rio shells, a great combination. The birds and weather cooperated to give us a grand hunt with lots of birds and lots of shots. Some of the shots I made were really spectacular…almost as spectacular as some of my misses.

WARNING: Hunting at ScatterGun Lodge will absolutely spoil you for pheasant hunting with most other outfits.

FULL DISCLOSURE: Chuck’s wife, Sheila, actually runs things. Chuck just puts his foot down… and does what he is told.

Thanks to Chuck & Sheila Ross for a very memorable hunt. I expect I’ll be back!

Amigos
Why We Hunt