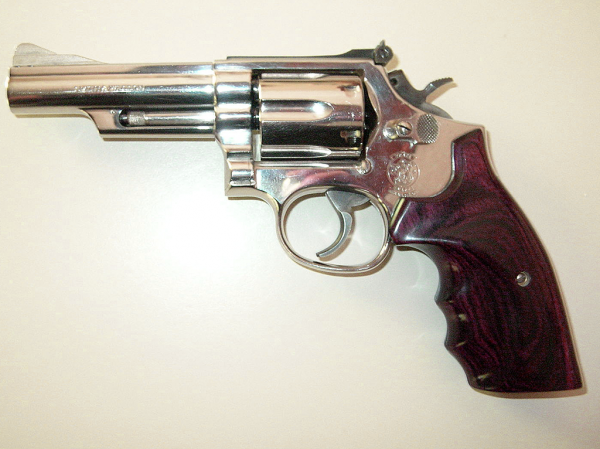 If you read my last post (Double-action Revolvers, Why Not?) you’ll know that I have been thinking a bit about DA sixguns and their value as defensive tools. In light of that, I thought I might share with you about my favorite double-action revolver; in fact, it’s one of my most favorite guns of any kind. I’m talking about the Smith & Wesson Model 19 with a 2 1/2-inch barrel.

When I started my career as a Texas peace officer, my department required that we carry a revolver capable of chambering the .38 Spl. cartridge. Back in those days, that meant you carried either a Colt or a Smith & Wesson. I tried several Colts and they were fine guns, but I finally settled on the S&W Model 19 as the best gun for me. It fit my hand and was a rugged, reliable, and accurate fighting tool. Also, I will admit that the fact that I was a great admirer of Bill Jordan, the Border Patrol fast-draw whiz, had something to do with that selection, too. You see, Bill had a hand in helping Smith & Wesson design that particular revolver.

My duty Model 19 was a 4-inch gun but I soon bought one of the new 2 1/2-inch versions for off-duty wear, as did several of my fellow officers. We soon found that this short-barreled magnum was surprisingly accurate and even got our chief, after a trip to the shooting range, to allow us to carry them in uniform. A sort time later, I was promoted to detective and the 2 1/2-inch Model 19 became my regular carry gun. Since those long-ago days, I’ve never been without one.

4 Responses to Revolvers: A Favorite…