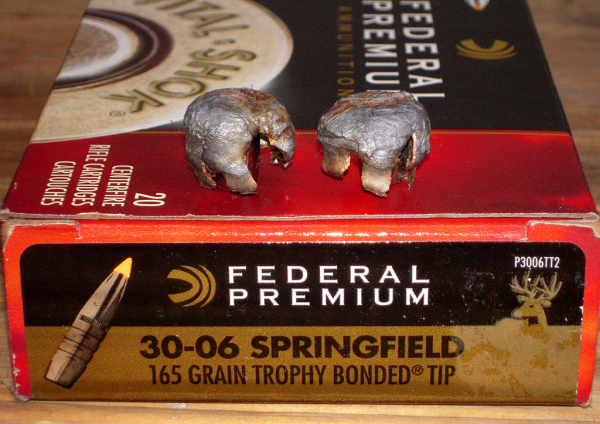 Richard Mann and I, among others, have been trying to point out the value of using premium rifle bullets when hunting really tough critters. Conventional soft-point rifle bullets are fine for deer hunting but simply won’t always get the job done when you hunt the tough stuff. By tough stuff, I am referring to elk, moose, bear, large feral hogs, aoudad, bison, and buffalo, to name a few. It is simply amazing how thick the hide is on some of these animals as well as the bone structure and muscle mass. You truly need a bullet that will drive through all of this stuff, stay intact, and destroy the vitals.

The bullets that you see here are Federal’s Trophy Bonded Tip bullets, 165 gr .30/06. They were recovered under the hide, on the off side, of a 300 lb aoudad. Their fired shape is so classic that you would think that they had been fixed up to use in a advertisement. In the past, I have lauded the performance of the Nosler Partition and the Barnes TSX bullets for tough stuff. Well, as far as I am concerned, you can add Federal’s Trophy Bonded Tip bullets to that list.

Too often hunters will have a bad experience with wounded game and decide that they need to go to a more powerful caliber for their hunting. The actual fact is that their caliber selection may be just fine if they would select a bullet that was tough enough to get the job done. I rarely hunt with magnum-caliber rifles – in fact, I only own one. The reason being, with proper bullet selection, I find that the standard rifle calibers can easily get the job done… and magnums, with the wrong bullet, will often fail.

There’s no question that rifle ammunition with premium bullets costs more. So here’s a tip… do your pre-season practice with standard soft points of the same bullet weight as what you hunt with. And you can also use them for your deer hunting chores without a problem. Then you switch over to the ammo using premium bullets when you are going after big critters. Use the same brand of ammo and the same bullet weights… just be sure to check your zero before hunting.

I love hunting aoudad here in the Southwest. But I sure do like for them to fall right down when I shoot them. Trust me, wounded aoudad don’t leave much of a blood trail and trying to track them across our desert mountains is the picnic that you want to avoid at all cost.

Don’t ask me how I know that.

Afrikaner Luck
Paying to Hunt
Thoughts on the Scout Rifle

One Response to Bullets For Tough Critters