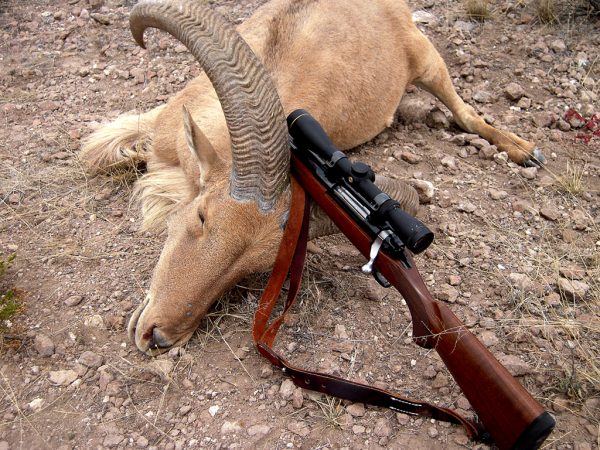 Here’s a nice aoudad that I recently took in the mountains of southern Presidio County. Aoudad were introduced on the ranches in the Big Bend country of West Texas in the 1950’s. Since there are very few high fences in this country, the animals are totally free ranging and make for a very challenging hunt. In addition, these critters have really taken to this high desert country and the population is enormous.

Typically, aoudad are very wary animals and long shots are the norm. However, they rut twice a year and, like most animals, get a little silly and forgetful during those times. Because of the rut, I was able to get within 200 yards of this big ram. He didn’t even make a run for it until just before I fired my shot.

The rifle that I used is a left-handed Ruger Hawkeye, in .30/06, that has a Timney trigger and has been tuned up by Clayton Smith. The scope is a Leupold 3×9 and the ammo used was Federal 165 gr Trophy Bonded Tip. Oh yes, and, like most of my rifles, this one sported a Peabody sling from Barranti Leather Company. I have spent some time putting this hunting combination together and am pleased to say that it worked great!

I was hunting with my old retired Border Patrol buddy Wayne Wiemers, Alamito Hunting & Guide Services. Wayne guides Big Bend hunts for aoudad, mule deer, pronghorn, and javalina. But he doesn’t do the internet stuff so you have to call him on the phone (y’all remember what phones are, don’t ya?). His home is 432-729-3308, his cell is 432-556-6133, and his FAX is 432-729-3944. Wayne’s prices are about the best that you’ll find in West Texas and his hand shake is better than any contract that you’ll ever read.

Not only does the aoudad provide a great trophy but, when hunted under free-ranging conditions, it is one of the most challenging hunts that you will find in this country. I’ve already booked with Wayne for a fall hunt and you should too.

One Response to An Aoudad Hunt