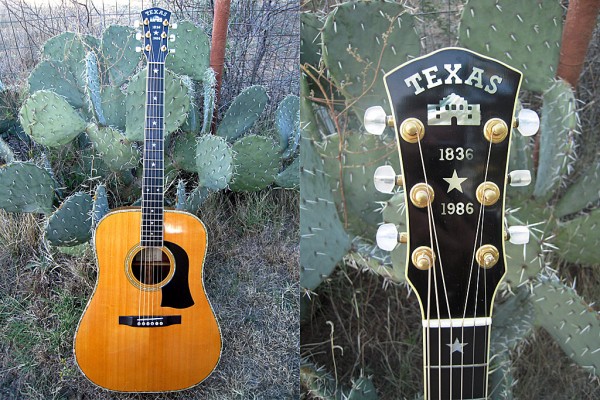 As many of you already know, my friend Texas bluesman Mark Pollock recently lost his battle with cancer. Mark owned Charlie’s Guitar Shop, in Dallas, for years and, some time back, sold out and moved to Alpine. His Transpecos Guitars, in Alpine, was the headquarters for pickers in our area. In addition to knowing just about everything worth knowing about guitars, Mark was also a gun guy. So you can begin to see why he and I hit it right off from the very beginning.

Recently, thanks to the kindness of his wife Mary, I was able to purchase the guitar that you see in these photos. At one time, Mark owned three Mossman guitars, but this was the one that I always drooled over. In addition to being a very fine guitar, Mossman guitars have an interesting history.

Stuart Mossman founded the company, in 1970, at Winfield, Kansas. He quickly made quite a name for himself by constructing acoustic guitars that were built right and sounded great. Unfortunately, due to a fire and other misfortunes, Mossman sold the company in 1986.

Scott Baxendale bought Mossman and moved it to Dallas, Texas. He continued to build great guitars, but sold the company in 1989.

John Kinsey and Bob Casey bought Baxendale out and soon moved the guitar company to Sulphur Springs, Texas, where it continues today.

This particular dreadnought guitar was built during the time that Scott Baxendale owned Mossman. It is #1 of 15 guitars that were built to honor the Texas Sesquicentennial in 1986. The back and sides are solid Indian rosewood and the top has lots of bling on it. The headstock is inlayed with mother-of-pearl and the top appears to be trimmed in abalone. More especially, this guitar has a great booming sound.

Mark Pollock always said that this was a sure enough “cowboy” guitar and that I really needed to make a home for it. Thanks to Mark & Mary, that has now become a reality. It is interesting the way objects link us to memories, and memories link us to friends, here and gone. That is exactly the case with the big Mossman dreadnought.

Videos from the Texas Cowboy Poetry Gathering
Songs and Stories, 2007
Gigs From Hell