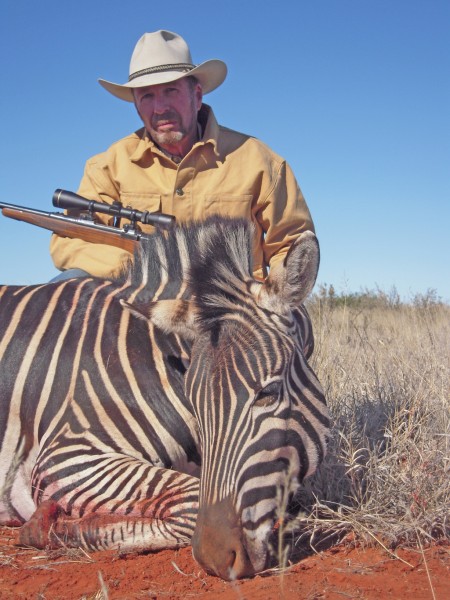 When we were planning the plains game hunt with Fort Richmond Safaris, in South Africa, I had a list of things that I wanted to hunt and other animals that I really wasn’t interested in hunting. Fortunately, I was smart enough to admit that I would make my final decision after seeing these critters on the hoof. Sometimes they just look different in the flesh and other times the difficulty of the hunt makes them a desirable trophy. Such was the case with the zebra.

While trying, and trying, and trying, to get a blesbok for Linda Powell (and she finally did bag a nice one), I kept catching glimpses of a small herd of zebra. They were pretty spooky and mostly what you got to see was a bunch of zebra butts leaving the neighborhood. That coupled with the fact that I happen to think that a zebra rug is about the prettiest of all the animal rugs made me decide to take one if the opportunity presented itself.

While glassing the animals, I noticed that one zebra was just a bit darker than the others and that’s the one that I picked. After several approaches, I finally got a broadside look at him from about 250 yards. The Sierra bullet from the 7×57 that I was shooting hammered him in the right shoulder. Nothing happened except that the zebras ran off.

When the stopped again, about 100 yards further along, I hammered him in the right shoulder again. No response. They ran off. Did I mention how tough zebras are?

We watched the zebras run through some brush and up the side of a hill. As they came out of the brush there was one less animal in the herd. That’s what I call a clue. We quickly found that my zebra was down and a neck shot, while unnecessary, was delivered. I am really glad that I kept my options open and considered taking a zebra. What a magnificent trophy!

Fort Richmond Safaris is also a working livestock ranch, with 14 families living and working on the property. I can assure you that none of the meat went to waste. However, if any of you folks want to whine about “those poor little animals,” you will please note the mistletoe on the back of my pants and the fact that you have been blocked.

8 Responses to A Real Trophy