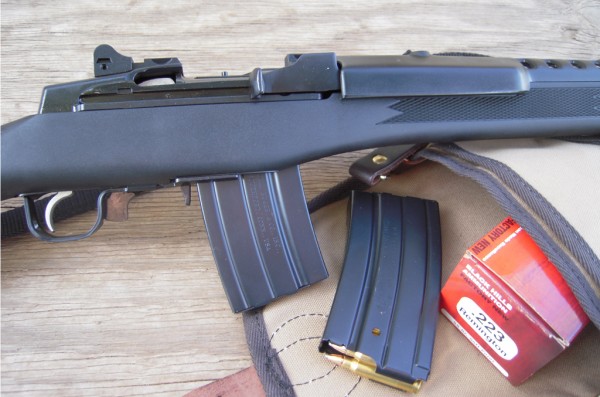 For a while now I have been searching for a rifle to just leave in my jeep. Oh, I keep a tricked out Remington 870 in the Jeep and have been known to have some sort of pistol in reach pretty near all of the time. However, a lot of the country that I live in is wide open and isn’t really shotgun or pistol country. And, since it is pretty close to the Rio Grande, I figured that something that held a whole lot of bullets might not be all that bad.

Without intending to take anything away from the various AR’s and AK’s, I must admit to having always had a soft spot in my heart for the Ruger Mini-14. I like the Garand-like safety which works well of a left-handed person like me. I like the portability of the Mini-14, too. It reminds me of the old M1 Carbine, but with a better cartridge.

A few years ago, Ruger simply stopped production of the Mini-14 and revamped their machinery. Essentially, they tightened up the rifle’s tolerances and slightly beefed up the barrel. No, it’s still not an MOA rifle, but it is also not designed for an MOA task. But it will qualify as a MOC rifle….that’s minute-of-cartel for your northern folks.

The Mini-14 that I chose is the tactical model with the black synthetic stock. I like it a lot and it sure likes the good Black Hills ammo that I have been feeding it. Right now I have no plans for putting a scope on it. The iron sights seem to be just fine, although I will probably grind off those silly wings on either side of the front sight.

We don’t have much trouble along this particular stretch of the Rio Grande; it’s too rugged for most of the dope smugglers and ne’er-do-wells that haunt the country further downstream. But, when you do get in trouble down there folks, you are on your own. There’s not any cell service and you may go all day and not see another person. What I’m saying is that you kind of have to take care of your own business down in those canyons and the vega of the river.

So I think this Ruger Mini-14 will do a yeoman’s job as a Jeep gun. In a way, it sort of reminds me of Frank Hamer’s Model 8 Remington, in .25 Remington, that he used to tend to a lot of business.

18 Responses to A Jeep Gun