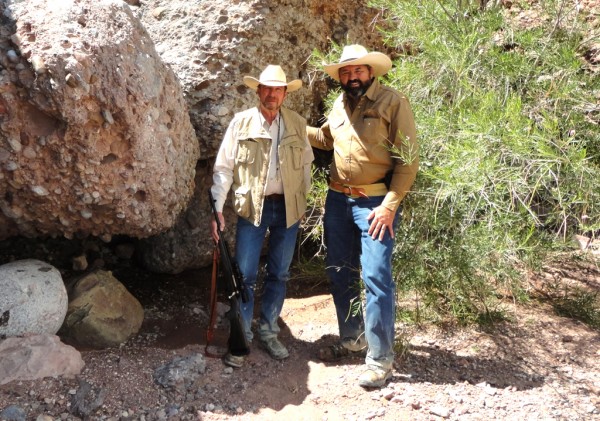 Joseph Russell “Joe” Sitter (1864-1915) is one of those Southwestern lawmen who is not well known but who worked hard to keep the border safe during the Mexican Revolution and bandit troubles in the early part of the 20th Century. Sitter served for quite some time as a Texas Ranger under the intrepid Captain John R. Hughes. He finally quit the Rangers for the more lucrative and secure job of United States Mounted Customs Inspector. Regardless of his job title, his task was to continue to ride the Rio Grande and deal with revolutionaries, smugglers, and outlaws.

Sitter soon became convinced that a Mexican bravo named Chico Cano was responsible for a good deal of livestock theft, smuggling, and general devilment in the lower reaches of the Big Bend country. In 1912, Sitter, Customs Inspector Jack Howard, and Brand Inspector J.A. Harvick, set out for a little village along the Rio Grande with warrants charging Cano with horse and mule theft. They caught Cano at a funeral wake, handcuffed him, and started back through the mountains for Valentine, Texas.

However, the rode into an ambush set up by various of Chico’s amigos. In the hot little fight that followed, Sitter was creased in the head, Howard was wounded, and Harvick was mortally wounded.

I think it can be safely said that, at that point, Joe Sitter began a vendetta to bring Chico Cano to justice. But Chico wasn’t that easy to capture a second time. He was running with Pancho Villa and also being protected and informed by his many friends along the river. Bringing him to hand was not going to be an easy task.

On May 22, 1915, Sitter was in the area of Pilares and Porvenir with information that should have led to the capture of Cano. With him were Customs Inspector Charles Craighead, and Texas Rangers Hulen, Trollinger, and Cummings. On the night of the 22nd, they camped near the mouth of Pilares Canyon.

During the night these officers heard a group of horses pass nearby, obviously being herded by someone. With the coming dawn, they saw that the tracks led into the nearby canyon where a spring was located. Sitter separated his group so that they could cover both sides of the canyon as they rode to investigate. What they found was an ambush.

Sitter and Ranger Hulen were pinned down on one side of the canyon while the rest of the lawmen were driven back by the gunfire. The officers finally heard the firing stop and knew that Sitter and Hulen were either dead or had managed to escape. Afraid to try and go to them, the officers rode to a nearby ranch for help. On the next day, they led a large posse back to the site of the battle.

On the side of this lonely canyon, they found the bodies of Joe Sitter and Eugene Hulen, stripped, shot full of holes, and badly mutilated. Though no one had identified any of the ambushers, Chico Cano was blamed for the murders and was indicted but never prosecuted. Chico Cano is said to have died with his boots on in 1943.

This past May 23, 2015, marked the 100th anniversary of Sitter’s murder and the large Sitter family was planning a big family reunion. However, Sitter’s great, great nephew, Scott Tschirhart (a former Texas peace officer), wanted to spend the day at the site of the murder. Accordingly, he contacted me and asked for my help in locating the site and getting the necessary permission to visit it.

After some investigation, I was able to locate the ranch where the fight had occurred and obtain permission from a gracious landowner to visit the location. It took us some 12 hours to get to the scene, most of it over rugged roads and scant jeep trails. But get there we did.

The canyon and spring are located in some of the most remote desert country in the entire Southwest and not far from the Rio Grande, which is once again troubled and dangerous. We stood where few men have ever been…two Texas lawmen honoring the memory of two fallen Texas lawmen. Sort of the proper thing to do on a Memorial Weekend, to my way of thinking. And, besides, I made a new friend in the bargain.