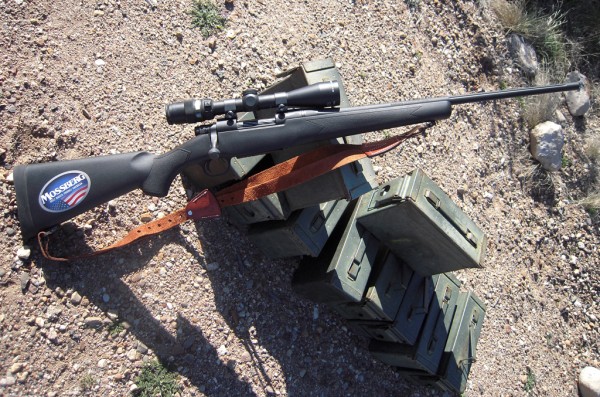 This past week I spent several days at Gunsite shooting the Mossberg rifles. Since I already had an assignment from the American Rifleman, I spent the majority of my time with the Mossberg Patriot. Now you can go online and look at all the variations that Mossberg offers in the Patriot family of rifles – and there are quite a few.

My test gun was a short-action, in .308 Winchester, with a synthetic stock. This .308 has a button-rifled, fluted barrel, 22 inches in length. It uses a 5-round dropbox magazine and has the Mossberg patented Lightning Bolt Action trigger. I chose to top this Patriot off with a Trijicon 3×9 scope that has the tiny illuminated dot in the center of the crosshairs. Barranti Leather Company also sent along some Peabody slings with our initials carved into the adjustment tab (great slings, by the way!).

I was first impressed with the trim, classic lines of the synthetic stock which is, of course, the way God intended all rifle stocks to be. And, since a light, clean-breaking trigger is one of the best advantages on a rifle, I was pleased with the Mossberg version.

The Patriot action is also quite smooth. Gunsite teaches rifle students to keep the gun in the shoulder pocket and to run the bolt again after each shot. To reinforce this, they set up several training scenarios that require multiple, quick shots. The Patriot’s action is so smooth that, even though I was running a right-hand bolt from my left shoulder, I was able to stay in the game and get my hits (don’t be surprised to see some left-handed Mossberg rifles in the near future). Another advantage to this action is that, even though this is a push-feed with a detachable box magazine, you can still load single rounds through the ejection port. This is an important feature that is often overlooked in other brands of rifles.

It is my understanding that John Zent will be reviewing the Mossberg Patriot rifle for the American Rifleman. But I will be doing a feature on field shooting positions and will include a sidebar with my impressions of this fine rifle.

Mossberg has always striven to give the customer a lot of gun for his money. Their recent new rifle introductions have only strengthened this philosophy. The Mossberg Patriot is quite a gun. With suggested retail coming in under $500, it is not only quite a gun, but it is also an impressive value.

96 Responses to The Mossberg Patriot