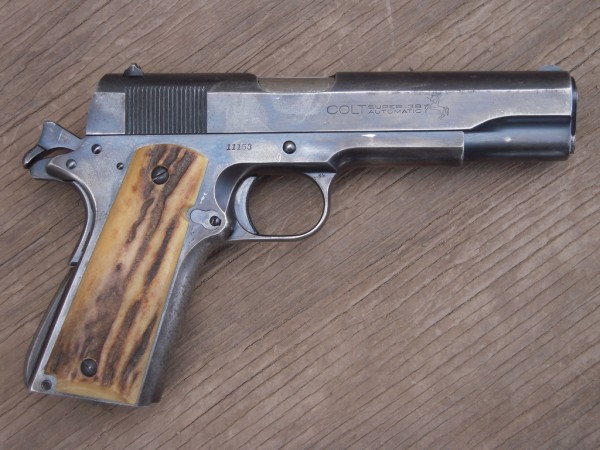 The Colt Government Model that you see pictured is what I get for hanging around gun shows (I’ll swear, they are worse than beer joints!!!). What it is is a 1932 Government Model in .38 Super, complete with the proper two-tone magazine. When I traded for it, it came with the factory checkered walnut stocks that were common at the time. The old, yellowed and vintage stag stocks that you see on it are compliments of my friend Ray Parga, at Del Valle Gunsmithing, in Marina, California.

The accepted history is that Colt previewed the .38 Super Gov’t Model at the 1928 Camp Perry matches and began producing and shipping the guns in January of 1929. And, according to several Colt references that I have studied, this gun was shipped in 1932. The gun shows a bit of wear but no abuse.

At this point, I just have to imagine what use this particular .38 Super was put to. Could it have been one of the .38 Supers that were carried by such as John Dillinger or Baby Face Nelson? Could it have been in the shoulder holster of Frank Hamer or Mannie Gault that day in 1934, when they sat along a road in Louisiana and waited for Bonnie & Clyde to show up? Or it could have been carried in the holster of one of the many Texas Rangers who, over the years, have favored a Colt auto in this caliber. I just don’t know, but I’d sure like to find out.

Who knows? One of these days I may send off for a Colt letter on the gun. Right now it is just a pleasure to add it to my little gun collection and wonder about where it has been. You folks who collect old guns will understand the joy of acquiring such a piece and delving into its history. It is an affliction… and we glory in our affliction!

Help Tell a Great Story: Sponsor "It's a Cowboy I Will Be."
Field Tactics For Dove
Defense at a Distance

202 Responses to A Fine Old Pistol