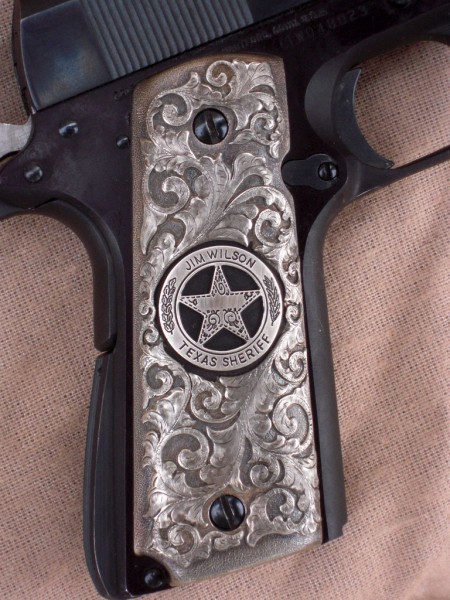 The first ornamental metallic pistol stocks that I ever saw were those that came out of Mexico. Metal overlayed with gold and silver, these Mexican stocks were usually adorned with the Aztec calendar or the Mexican eagle & snake symbol that is featured on their flag. When I was a young man they were quite popular with lawmen and pistolians on both sides of the Rio Bravo. For some reason, they just never caught on with Glock shooters, though.

Over the years, I have owned several sets of these gold & silver stocks for various 1911 pistols. However, the last few sets that I have examined showed a real lack of quality. The metal was thin and flimsy and the stocks did not fit the pistol very well. Given Mexico’s crazy attitude towards guns, the reduction in quality is not all that surprising.

Fortunately, we have a number of craftsmen in this country who are keeping the tradition alive. More importantly, they are also keeping the quality high. One of these is Kevin Johnson, of Clarendon, Texas (806-205-0435). Kevin has engraved guns and stocks for a number of discerning pistol toters, including quite a few Texas Rangers. Kevin also has a Facebook page and, from time to time, shows some of his work on that page.

The 1911 stocks that Kevin made for me are metal with silver-scroll overlay. In my advancing age, I decided to forgo the addition of gold to the mix as I was afraid it might look a bit too gaudy. In the center of each stock is a duplicate of my old cinco peso badge. Most importantly, Johnson’s metallic pistol stocks are sturdy and they fit perfectly. And they are certainly an attractive addition to my Colt Lightweight Commander.

I am reminded of something I once heard Ranger Capt. A.Y. Allee say… ”It would almost be an honor to get shot with something that pretty!!!”

These silver 1911 stocks arrived just in time to help me celebrate yet another birthday. I like the idea of celebrating the border lawmen who have gone before. I was raised in the Southwest, have lived here all my life, and will undoubtedly die here, too…………… Not anytime soon, though.

185 Responses to It’s a Border Thing