A Preview of Things to Come 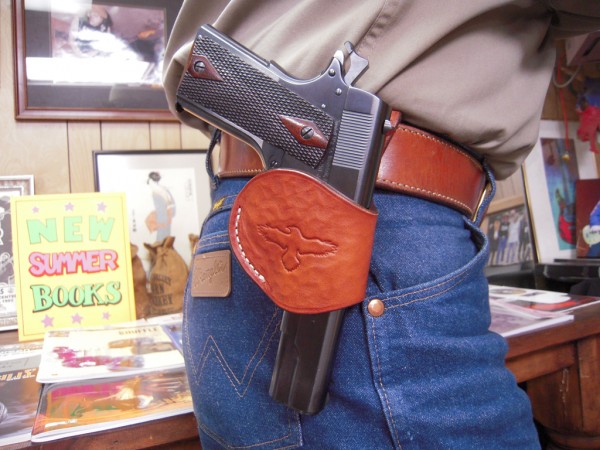 This will give you a heads up on a project that I’ll be working on in the coming weeks. The pistol is a 1911 from Turnbull, in .45 ACP. This is a very nice reproduction of the original 1911 Commercial Model pistol. I have examined the gun, but not shot it yet. But I am impressed with the fit and finish of this pistol and expect it to do well during testing. The traditionally small sights, common to that era of 1911, will be a challenge for these tired old eyes, but we’ll give it our best.

The holster is the Countess from Barranti Leather. Mike Barranti has been making his version of the Yaqui Slide for some time and calls it The Colonel. As most of you know, Col. Jeff Cooper championed the Yaqui Slide and thus it has “The Colonel” designation.

However, Mike Barranti has also been consulting with Gunsite Range Master Il Ling New to design a similar holster that would be better suited for women. This is the result. The slight drop in the holster makes it work quite a bit better for the ladies. Col. Cooper’s nickname for his wife, Janelle, was The Countess, so that’s where the name comes from.

However, I’ll let you guys in on a little secret. As we guys get older, our shoulder joints don’t work as well as they used to. And snagging a pistol from a high-ride holster can become a little difficult. If that is happening to you, you might give The Countess a try. It can be much easier to make a quick draw from it than the higher-riding holster. And, guys, if anyone tries to give you some grief about wearing a holster called The Countess, just hang some mistletoe on the back of your pants and go on about your business.

I’ll be reviewing Turnbull 1911 for a Dope Bag feature in an upcoming issue of the American Rifleman. And, I have to tell you that it is a great week when a good gun AND a good holster both arrive at the same time. This is one project that I’m sure looking forward to working on.

129 Responses to A Preview of Things to Come